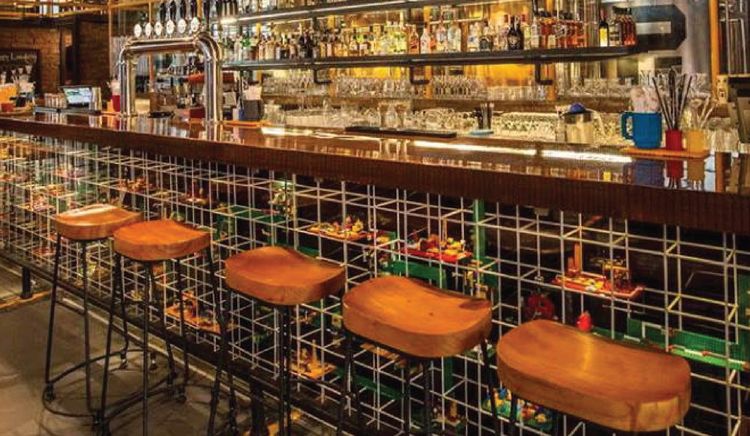 If 5 years ago someone would have thought that Topsia (an area otherwise existent in the food map of Kolkata for China town nearby) will slowly make its presence felt in the food scenario with a microbrewery, then people would have laughed. If someone would have dreamt that Ayaz Basrai, the chief architect behind Church Street Social in Bangalore or Cafe Zoe and The Bombay Canteen, will be designing a resto bar in Kolkata, then eye brows would have been raised. But all this has happened in reality.

The Grid is a microbrewery but it’s more than that. Once a journey around the entire 10000 sq ft area which is carefully designed with an industrial look, the first thought that comes to the mind is that one visit to this place is not enough to enjoy all the different experiences within one place which have been planned for the guests. The waiting area takes you through the different stages of preparation of the place and then depending on the mood and the size of the group, one can select various places in the pub to be seated.

The 38 ft long bar at the centre of the place is a lego bar where one will find the different lego artworks to the extent the stirrer holder, is also made of lego. The seating is spread all across at different levels which make it unusually interesting. There is the beer garden at a mezzanine level which has creepers crawling up the structures around the benches and then there is the sunken seating with sofas which are extremely popular here. At the top level is the ‘Asylum’ which is a closed door space created in all white. It is a soundproof room with old fashioned cane iron chairs especially designed for this space; since it is no longer under production, with a projector and large screen making it apt for a corporate booking or a party with a small group. There is Grid X for private parties with a separate DJ console and if not still lost, there is a large smoking room with tables and chairs, which is perhaps the largest in the city and from cigar to hookah, one can also bring their drinks up to the smoke room and enjoy to the fullest.

While as one takes a round of the place, it looks like a maze; however, the real star of the place is the food. The aim of the menu was to handpick and innovate some of the cult dishes from across the globe and especially India and bring about a cohesive and appealing menu. From local favourties, to pizzas, pastas, burgers, sandwiches, rolls, grilled stuff, the menu is quite a handsome fair. Some out of the box dishes such as a Grid garlic naan rolls, keema matar scotch eggs, smoked spaghetti aglio olio and chicken berry pulav have been carefully crafted to give an unforgettable taste. Some specific dishes have been picked up from various regions such as the Candolim beach’s Maria Lobo’s fisherman basket which has calamari, Apollo fritter and Bengali style fried prawns to appeal to the local taste, Juhu Gymkhana’s coriander noodles which are tossed with a spicy green chutney, Bhindibazar chicken tikka inspired from Mumbai’s bhindibazar, Parvez’s chicken centre and many more. They simply manage to transport a person to that locality. The food here is nothing short of a celebration while the drinks and the desserts are ecstasy. In desserts, Guptaji’s chocolate toast is a must try, while in drinks, the list of must try cocktails is quite endless. They are all quite innovative in their taste and presentation. A few stand out such as the smoky Tennessee, 3 tomato spicy Mary, trio daiquiri and tin tin which is a tiki white rum based cocktail.

The fact that Gaurav Karnani, the Managing Director has visited some 42 micro breweries and the young enthusiastic Chef Chiranjib Chatterjee and F&B Manager Tanmoy Roy have done enough homework which is evident in the food and beverages that are available here. Usually a lot of pubs with good drinks fail in the area of food; however, in this case, the owners has clarity right from the start that they did not want their guests to enjoy the drinks and then go on to have food somewhere else.

The fact that Kolkata has now 3 microbreweries, the fact that the food and night life and social gatherings are getting more decentralized and different pockets of entertainments are growing up in the city, is a testament to the fact that it is never too late for Kolkata to catch up with other cities of the country when it comes to partying and good food. Here is to many more such places.