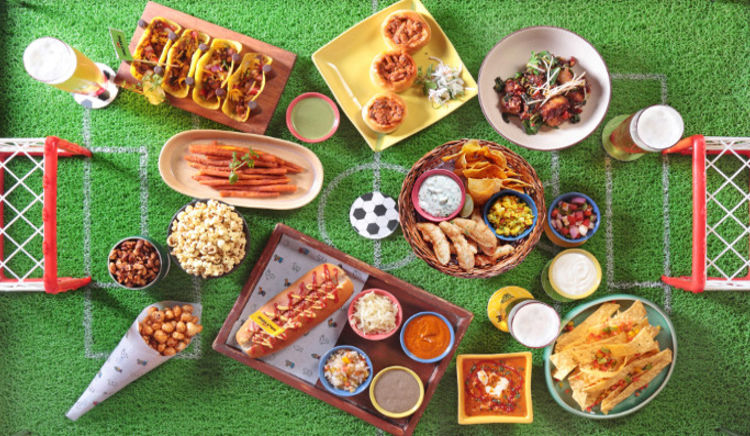 Yes, FIFA World Cup 2018, is on and footballers are stealing the show on television screens and stadiums alike. Football’s greatest showpiece inspires both passion and frenzy but what audiences are keenly looking forward to are the crowds in 11 host cities across Russia. As you tune in to giant screens along with more than 3 billion fans, you will need to fuel up for the cheering spree. It is a good idea to keep track of nibbles you can binge on as you catch the sport with your football-crazy buddies. You can catch all the football action live at all Monkey Bar outlets, including Delhi, Mumbai, Bangalore and Kolkata, as the brand is rolling out a special football promotion called 'Halftime'. It is offering football snacks from around the world, including Football Farsan, Mexican Wave, Kahn’s Hot Dog and No. 10. What is more, there are deals on beer and drinks to keep you hydrated in the season of soccer. Also, the restaurant space is being divided into 2, helping fans to take sides during trophy-winning performances.

Gravity Spacebar, where North Indian cuisines, tapas, fresh brews and handcrafted cocktails rule the roost, is upping the ante during FIFA season. Not only can all matches be followed on giant screens, patrons can also avail the ‘1 +1’ offer on specific drinks. Beer buckets can also be snagged at a flat 20 per cent discount during match hours.

In case you can prove your sporting credentials, there are more freebies coming your way. Flaunt the jersey of a team that is playing on the day you are visiting the restaurant and you stand to get a drink for free. The deal is sweeter if 2 people on the same table are wearing a team jersey. Then a round of shots for both is complimentary. More fun offers are in store for those who are willing to turn on the FIFA magic.

In case you call yourself an ecstatic football fan, then fine food and spirits will give you company at Dum Maro Dum. Watch the game live and scream your lungs out, even as you sip on unlimited IMFL for 2 hours, that is priced at Rs 999, all-inclusive.

But, the restaurant is pulling out all the stops for making the world’s biggest sporting event a memorable occasion for you. Love dressing up like your favourite World Cup hero, with jersey and hairstyle to match? Dum Maro Dum will not only click your photo but will also present you with a complimentary drink called FIFA, that is served in a football. Posing as a Mecca for football fanatics, Tourist is offering a raft of spirit deals even as the frenzied soccer celebration gets underway. For Rs 1499, all-inclusive, you can avail unlimited IMFL or straights, including Black Dog whisky, vodka, Bacardi white/black rum, Kingfisher beer, gin, or even cocktails and mocktails. The drinks can be paired with 3 vegetarian and non-vegetarian starters for one session lasting 90 minutes. The portfolio of starters includes everything from Garden Fresh Vegetable Pizza, Achari Paneer Tikka and Dragon Chicken Patiala to Chicken Tikka and London Fish And Chips. The restaurant-cum-bar has introduced a thoughtful touch by way of a themed menu for soccer nuts. Ronaldo Scissors, Neymar Golden Finish, Muller Winger, Messi Dribble, and SOW Red Card, inventive entries in the cocktail menu, are all available for Rs 399.

Themed bites too are part of the deal, and you can eat your way through Mexican Wrap, Brazilian Grilled Chicken, Cinnamon French Toast, Barbecued American Skewer and Spanish Omelette.

But, there is more in store. Unlimited beer for 90 minutes, i.e. for the duration of one match, can be had at just Rs 499, plus taxes. If you root for the great kick stars of your favourite team, the restaurant will offer free shots for every goal.