A Moghlai Ramzan Feast in Kolkata

Where to head for your fill of biryani in the city 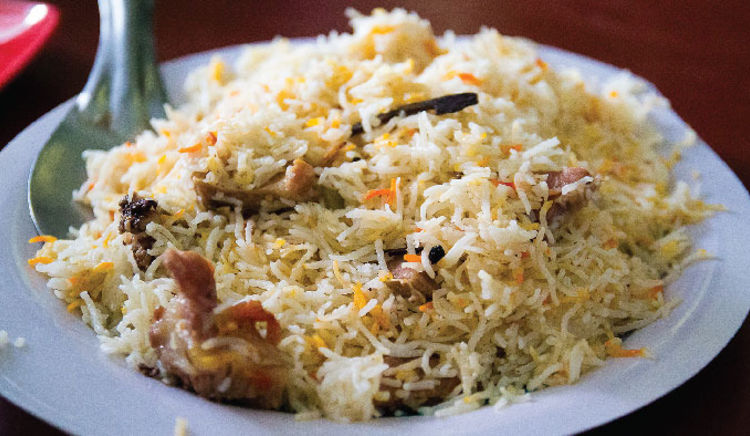 The love for Moghlai (as spelt in Calcutta) food is something that unites all Calcuttans.

What is referred to as ‘Moghlai khaana’ here is said to have originated from the kitchens of Wajid Ali Shah, the deposed nawab of Oudh, when the British exiled him to Kolkata.

The heart of Moghlai food lies in the uniquely Kolkatan version of biryani which sees its roots in the biryanis (or pulao as some would say) of Lucknow, which rice loving Bengalis love. These are lighter than biryanis found in the South and West of India and have potatoes in them. The nawab’s chefs apparently added the newly-introduced tuber to help balance the cost of meat in tough times.

Other popular orders in a Moghlai place are the curd and ghee-based sauce rezala which can be made with mutton (goat), beef or chicken and the slow-cooked, poppy seed-based, chaap. The word chaap, some say, comes from the Bengali word for pressure.

The first renditions of Moghali restaurant were to be found in old Calcutta in the north and the centre of the city. Over the years some of these have opened branches in the South of Kolkata and many independent stalls have sprung up all over too.

At its most humble, biryani can be found sold by lone operators on the street from a dekchi (vessel in which biryani is cooked). At its most ‘posh’ you will have air-conditioned ‘family rooms’ of traditional restaurants with bright lighting and Spartan, cramped seating. No one goes to a five star or a fine-dining place for Moghlai food!

The Moghlai joints of Kolkata are Muslim-owned and Ramzan is a good time to visit them if you haven’t been there yet.

My favourite is Shiraz in Park Street where the biryani is lighter and less greasier than in most others.

Then there is Nizam’s at New Market where I drop in whenever I go to that area. This is where the famous rolls of Kolkata are said to have invented. There are two outlets adjacent to each other, you get beef in one. The biryani is quite nice. The seating more grimy than in Shiraz.

There is the hundred year old Aminia in Central Calcutta which has now opened a branch near Malancha in South Calcutta, close to our home there. I went there during a recent trip and saw that the biryani here hadn’t lost any of its glory while moving to the suburbs.

There is Zeeshan near the Ice Skating Rink from where I used to pick biryani and rolls for Mumbai while heading to the airport.

The new generation swears by Arsalan at Park Circus which came up after I left Kolkata for Mumbai. Like a crusty old curmudgeon I dismiss the biryani here as being too greasy and not vintage enough.

Royal in North Calcutta is an iconic place and is said to have been started by one of the cooks from the nawab’s kitchen. It’s too far for me as I am a South Calcutta boy and am yet to go there. Plus their biryani doesn’t have the prized alu (potato). The chaap is recommended here by my friend and food blogger, Kaniska.

Us former Kolkatans in Mumbai got great Calcutta biryani for a while (we will not touch Jaffer Bhai with a barge pole) when Arsalan opened here. With Arsalan shut your best bets are Calcutta Club at Oshiwara where the owner says he has chefs from Shiraz and the Shiraz franchisee Lazeez at Mahim (rather greasy though). The Hangla outlets sell, what my friend, film director and former food critic, Soumik calls the Deshopriya Park stall biryani.

This Ramzan we had a nice (slightly garam masala heavy though my Kolkata friends declared) mutton biryani from Amit Roy’s Peetuk (09870126912) in Mumbai and mutton chaap to go with it.

Hope some good biryani comes your way to make your Ramzan special.