Oberoi Gurgaon puts together the pieces of Mughlai food painstakingly What exactly does it entail to try and recreate menus of the Mughal emperors? It has been a conundrum for a team that includes Chef Ravitej Nath of The Oberoi Gurgaon, Osama Jalali a food impresario who specializes in the cuisine of Old Delhi and his mother Mrs. Nazish Jalali who hails from Rampur. The team had one objective: to discover lost recipes that originated in the Mughal era that spanned from 1526 to 1857. They searched everything from Mughal miniatures that depicted banquets to the memoirs of the emperors, meeting in the process Persian scholars and housewives from the Walled City who occasionally cooked a traditional dish or two.

“The most difficult part for us was deciphering the recipe as it was written in historical records”, said Chef Nath, referring to the elliptical way that a recipe would be set down, that too in Persian. For a team of today’s world, with access to coloured photographs and exact recipes, figuring out what the final result was supposed to look and taste like was rather groping in the dark.

To visit the festival as a diner, you have to pretty much put your notions of ‘Mughlai food’ aside, because the fare is as different from our conventional notions of cream-laden gravy. As the crack team at The Oberoi Gurgaon has taken care to include the diet of each of the emperors, a meal is rather like hurtling through three centuries. The kababs – the Pateeli kabab that featured minced chicken studded with raisins, pistachios and apricots or the Luleh kabab – the minced lamb and pomegranate pearls with cucumber filled in a thin spiced wheat flour crust and griddle cooked had less to do with Indian cooking and was more a representation of the flavours of Persia. In the second half of the meal, the Indian influence of curries, preparations of yam with black pepper and lamb cooked with raw mangoes indicated a growing fondness for Indian ingredients and styles of cooking.

However, the true gems of the festival menu were not the everyday dishes of the emperors, but the ‘party’ dishes (a bit of a misnomer, because for the Mughals, every day was party day). Motia Pulao consisted of pearl-like globules made painstakingly with egg-whites that had first been poured into goat’s intestines and tied with precision. “That one took the longest time to get right,” sighed Chef Nath. It’s a fair bet that Parinde main Parinda could have hardly been a cakewalk either. A duck stuffed with a chicken that was filled with a whole (deboned) quail that had been filled with an egg and cooked so that all the poultry were optimally cooked – a nightmare that needed several trial runs – was the single piece de resistance.

The best news is that the hotel is not using the research to ‘own’ any of the recipes, processes or ingredients. It wants to bring back the long-forgotten food of the Mughals and put it out there in the public space so that it becomes a public resource. 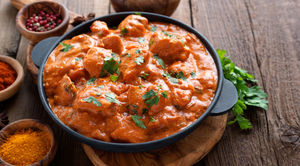