A network of restaurateurs, chefs, home bakers, chocolatiers, caterers, food suppliers, food consultants, hoteliers and food writers formed an association to help each other and support each one’s initiatives. The 1st anniversary of the Food Entrepreneurs Association (FEA) was celebrated in the second week of July in Ahmedabad with a lot of aplomb and grandeur at The Grand Ballroom in The Grand Bhagwati Hotel. The chief guest of the anniversary celebration was the Deputy Chief Minister of Gujarat - Nitin Patel, who despite not being well graced the occasion. 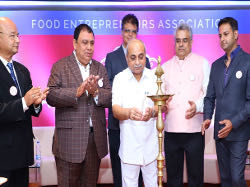 The network includes restaurateurs, chefs, home bakers, home chefs, chocolatiers, food suppliers, hoteliers, consultants and food writers and the association in just one year of its existence has over 400 members. It has organized about one dozen events and industry-based programs which have kept members abreast with any new developments in the industry.

The anniversary celebrations were held at a beautiful Grand Ballroom of The Grand Bhagwati Hotel where guests were asked to pose for the picture before a backdrop with FEA poster along with a placard of whatever they identified themselves with, chef, restaurant owner, foodie, etc. Then they were welcomed into the huge hall which was beautifully decorated where Rajasthani folk singers sang popular folk songs to entertain the invitees.

The chief guest Deputy Chief Minister of Gujarat Nitin Patel arrived at 08:00 pm, but before that, celebrity Chef Pranav Joshi conducted a food quiz. It goes without saying that FEA members passed the quiz with flying colours.

While the formalities were being conducted where the year-long activities of FEA were listed, tasty Indian snacks were circulated. Some of the snacks were innovatively presented from the Jamun Shots to the marble-sized Potato Vada in dainty Wafer Bowls.

The Food Entrepreneurs of Ahmedabad as it was initially named was officially changed to Food Entrepreneurs Association after the network expanded beyond Ahmedabad. FEA is the brainchild of the author of over a dozen books and food critic Anil Mulchandani along with restaurateurs Darshan Rawal, Rohit Khanna and Dilip Thakker who together came up with the idea that it would be good for restaurateurs to create a network. The aim of FEA is to keep all its members informed about new government regulations and to help each other with information about procurement, staffing and other common issues which they all grapple with and to use their shared experience to help each other.

During the year FEA had many get-togethers and business meetings were also organised where restaurateurs, food joint owners and other stakeholders like food suppliers learnt about GST, FSSAI and had meetings with government officials to understand the new regulations.

The group is connected through social media on Facebook and on WhatsApp and the membership for FEA is free for stakeholders which include restaurateurs, chefs, cooks, food joint owners, food supplies, patisseries, chocolatiers, heritage hotel owners, caterers and food writers. 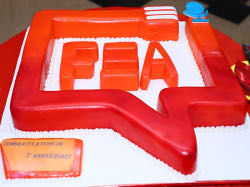 After the inauguration, a cake shaped as the FEA logo was cut by the founders of the group. There was an elaborate food spread, an all vegetarian affair, where Indian, Mexican, Italian and Chinese dishes were served. 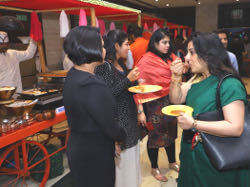 FEA members along with their family members enjoying food

There were over a 100 dishes from Pani Puri to Hakka Noddles to Chipotle along with tasty Kulfi and other sweets as dessert. Around 400 persons attended the event which included FEA members along with their spouses and other family members.