Sometime back I had brashly written here (Hit the Streets to Eat Local) about how you miss out on the local flavour while eating in five stars.

I happily ate my words during my recent stay at the Marriott Hotel & Resort in Goa.

I was stunned by the flavoursome chicken xacuti in the buffet in the Marriott’s Waterfront coffee shop, the day we landed there, and by the exquisitely spiced prawns and calamari grilled in cafreal masala.

Next afternoon there was a delectable pork vindaloo in the buffet whose aromas enshrouded the entire coffee shop.

In the meals that followed I had an excellent pork sorpotel and snapper in rechad masala. The fish curry was pretty nice too and the ambotik was suitably spicy. The latter two unfortunately had basa as this is not the fishing season in Goa.

Then I found the secret behind the great Goan food here.

Turns out that executive chef Anupam Gulati, a Punjabi from Delhi, and a former Oberoi hand, is a bit of a Goan food ambassador himself.

He gives his full support to a lady who is known as Aunty Jacinta in the Marriott.

She lives in a nearby village and began cooking commercially in people’s houses when her husband passed away. A decade back, the Marriott hired her on board as the Goan food expert.

She comes to work thrice a week and mixes the Goan masalas for the week and cooks too.

Helping translate this home cook’s vision into a five star kitchen is young Selester Fernandes. He is a Goan, who is an IHM grad, who instead of focusing on Thai and French cooking, tries to share the Goan food love.

Chef Anupam, tells me that there is a chefs council where the chefs from 5 stars in Goa such as the Taj, Hyatt, Alila Diwa and the Marriott of course, get together and try to see how to preserve and bring alive the Goan culinary heritage.

They are even planning to put together a Goan food festival together in a local food ground for the non-hotel guests.

Now these are the sort of stories that make one smile.

The only sad part was that I was the only person at the Goan counter at the Marriott while I was there.

Please explore local cuisines when you travel. It will make your trips so much more memorable.

The Marriott Waterfront buffet costs about Rs 950 plus taxes except on Sunday brunches when they are Rs 1050. The buffet is multi-cuisine but they have a Goan corner with a vegetarian and non-vegetarian dish and a section in the À la carte menu 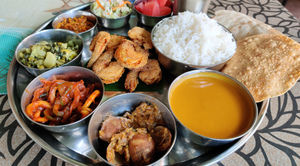 Healthy and Traditional Goan Dishes to try when at Home 4 Culinary Hotspots in Goa to Eat your Veggies 10 Best restaurants in Goa to dine at