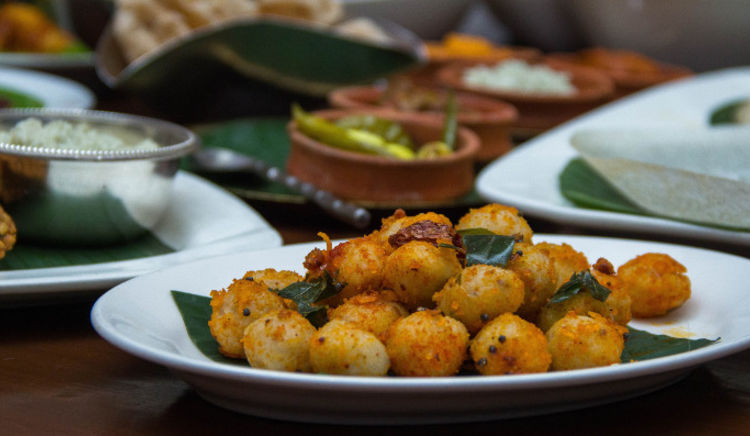 Umm...it is only a food festival and not a permanent feature, even though we would love for it to be!! Rated as one of the best South Indian restaurants in the country by foodies, food critics and food writers including our very own Mr. Vir Sanghvi, Karavalli has earned and maintained its reputation of serving the best home-cooked food from the kitchens of South India (primarily the Western coastal belt) in a five-star facility. So when Sonargaon at Taj Bengal decided to bring in Chef Naren Thimmaiah and his team for a food festival, it was nothing short of sensational news for food lovers across the city.

No amount of words can describe Chef Thimmaiah. He has been the face of Karavalli for more than 2 decades now. In fact, he started his career here and in those days under the guidance of Chef Sriram Aylur, who today is the heart and soul of Michelin starred Quilon at London. Several accolades under his belt including the Chef of the Year 2016 in EazyDiner Awards, there is only one word which can possibly describe him - ‘humble’.

The food philosophy of Karavalli as described by Chef Thimmaiah has always been to give the same experience as from our mother’s kitchen- no compromise on quality, whatsoever. The recipes are all collected from various homes across the Southern belt. Chef says that nowadays, most of his time goes in ‘sourcing’ or ensuring that the correct ingredient is coming in from the right place. So even for this festival at Sonargaon, he came in with all the necessary spices and also 500 no's of Kundapura coconuts essential to Karavalli cooking.

This festival sees the spread of some of their iconic dishes in 3 kinds of thalis - Vegetarian, Non-Vegetarian and Seafood. The option for À la carte is also there with the choicest of dishes from their exemplary menu. The vegetarian starters are Chattambade (chana dal vadas from Mangalore), Gobi Kempu Bezule (cauliflower florets deep fried in a light batter and tossed in some spices), Aritha Pundi (steamed rice dumplings flavoured with coconut and cumin, a dish from the Brahmin community of Mangalore) amongst many. The non-vegetarian appetizers have some beautiful plump Tiger Prawn Roast from Kerala, Meen Eleittad (fish steamed inside a banana leaf again from Kerala) and more. Both of these dishes were so unique in their flavour profile. While the prawns are spicy and have a multitude of fresh flavours from various spices, the latter is a simple dish where pomfret is coated in red chilli paste, lemon juice, salt, pepper and turmeric and wrapped in a banana leaf and steamed.

Curries have always been the high point in Karavalli. Even though every curry is coconut based, the souring agents, as well as some essential spices, are different and what distinguishes one from another. So while Goan Prawn Curry has kokum as its souring agent, Alleppy Meen Curry has raw mango to give it the sourness and unique fresh flavour. Karavalli Mutton Curry is a typical Mangalorean curry made with cashew paste and tomatoes. A very unusual curry in the menu is Mavinkai Mensukkai – a raw mango curry sweetened with jaggery, it is remarkable since it somewhat is in between a curry and a chutney and can be had with rice or simply on its own. The staples that come with the curries are the usual appams and Malabar paranthas and the desserts range from Bebinca and Dodol from Goa to Rice Payasams.

The festival is on till the 20th of August 2017 for lunch and dinner service.

Discover more of the Top Restaurants in Kolkata with EazyDiner