From Elgin road momos to Beadon street fish roll and Esplande moghlai porota, you will find the best of street food here Durga Puja is bigger than a Bengali only festival. It is celebrated by Bengalis across the world. In Bengal, people from all communities come together for this larger than life festival. As a puja, it is only for 5 days but the festivities begin from Mahalaya and end a few days later than Dashami. Shopping for new clothes, exchanging gifts, pandal hopping and most importantly, eating out becomes a part of life during these couple of weeks. This is the time for restaurants to go all out in displaying their gastronomy excellence while keeping in mind the Kolkata nostalgia.

Monkey Bar is a gastropub and while many may not walk into any of the joints expecting a flavour of Kolkata nostalgia food and revive individual Kolkata memories, this year Monkey Bar throws up a surprise.

Reputed home cook and Bengali culinary specialist 'Iti Misra' along with 'Chef Dheeraj Yadav' has come up with Next Stop Kolkata, a special menu for this occasion and it is worth trying. The menu is a compilation of various nostalgic places and the iconic food associated with them.

The beginning is with a cocktail and for a change, you can change your loyalty from a manga or mad men. There is Thanda Cha, Phuchka Pani Capriojka or Piara Peara (Tobasco Spiked Guava Juice) but our pick will be the Puchka Pani Capriojka. It will give you a flavour of the all-time quintessential phuchka tamarind water infused with Vodka and fresh mint and is very refreshing.

There is something for everyone on this menu. The brainstorming which has gone behind this needs to be appreciated. North and Central Kolkata, the older part of Kolkata with decades-old food joints, have many dishes to their repute without which the Kolkata foodscape is incomplete. 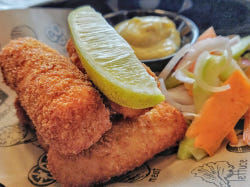 One can start with the Beadon Street Fish Roll, a take on the fish roll of Mitra Cafe. This was a top draw with a good quality Bhekti fillet stuffed with curried shrimps and served with Kasundi and Salad. Minced Shami Kebab Rolled Scotch Eggs is what is known as Dimer Devil and that is what is called here as Shoitan Dim. Vardaan Market Moong Dal Pakodi Chaat is absolute not to miss from Camac Street and that also finds a place here. 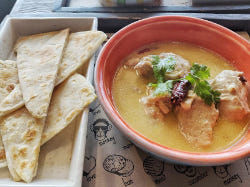 In the main course, there is Chicken Rezala, inspired from various reputed Mughlai joints in the Chitpur area, is a mildly flavoured chicken curry with cashew and poppy seed paste and served with triangular parathas. 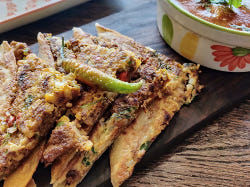 Expecting the rustiness of the original dishes will be a tall ask but the essence remains the same. Moghlai Porota is a delicacy which is loved by many and again a dish which is not at all Bengali but has become an icon of Kolkata food. This comes in 3 fillings and definitely if you want to get the best of taste, go for the mutton one. 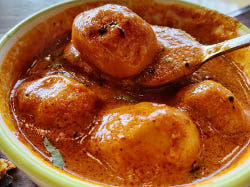 The best part about this dish is the rich Alur Dom which comes in a bowl along with it. It is lip-smacking delicious. 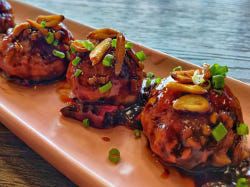 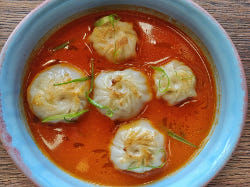 The 2 essential ingredients of Kolkata food - Elgin Road Pork Momos make an appearance as does the Tiretti Bazaar Prawn Dumplings. These 2 localities have lost much of their shine but ask one and all, the food memories still remain and Iti Mishra and Dheeraj Yadav have done a commendable job with both the dishes.

While the custodians and food guardians may fight over the authenticity of the food and the preparation and taste, the effort is not to try to be authentic but to tickle your taste buds and the muscle memory through the nostalgia of iconic locations. Must say that this has been worth an effort.

This festival is on until 21st of October and the pocket pinch will be around Rs.1300 per person approximately with drinks. It is a purely a la carte menu. Each of the dishes ranges between Rs. 225 to Rs. 395.