But what has changed in the new place is the radical way they have looked at the dishes. In some cases, a lot of experimentation has gone into the recipes or the ingredients. In some others, the preparations are authentic, but the presentation is refreshingly new. Here are a few of my picks from the menu: 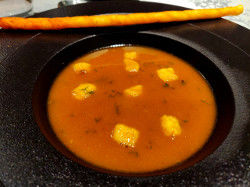 This favourite broth from Hyderabad has traditionally been a very popular dish in this hotel, especially in their Midnight Buffet. Locals love the Lamb Trotter Soup any time of the day, and particularly in the wintery late evenings. The new style Paya Shorba here has no trotter bones in it, in fact, trotter extract dumplings are served in the soup in a novel manner along with sheermal croutons. 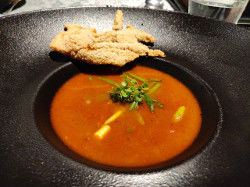 Here the Crab Soup from Chettinad cuisine is served with a twist. Boneless soft-shell crab meat is deep fried with a rawa coating and served with spicy tamarind based rasam. 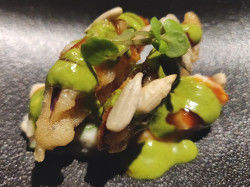 Crispy fried thin eggplant pieces are served on a bed of eggplant and water chestnut puree. The green chutney on top makes the dish even more delicious. 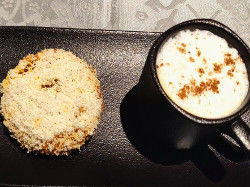 A take on chicken butter masala, the popular Punjabi dish. The chicken is served as a donut-shaped cutlet. The makhani masala is alongside in a cup as a foamy cappuccino. 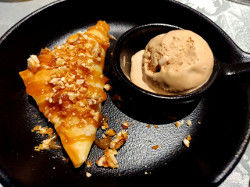 Hyderabadis love their samosa and chai in the evenings. However, this one is a dessert. The samosa is stuffed with sweet khowa, and the chai is actually a scoop of masala chai ice cream. 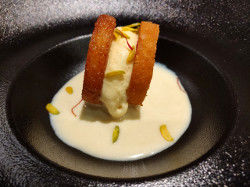 A contemporary version of the popular dessert from Muslim households. A sandwich made of round sugar syrup soaked crispy bread with rabdi ice cream inside.

The Hyderabadi dessert meets the South Indian sweet in this dish. Oven-baked Apricots are served with Mysore Pak Crumble and Vanilla Ice Cream. 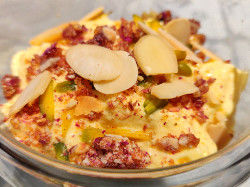 Perhaps the only place in Hyderabad where you get this dew dessert. This foamy winter dessert from Northern India popularly known as Daulat Ke Chaat and Malaiyyo is prepared using modern techniques and served with pistachio and almond flakes.