The man behind the legendary food store 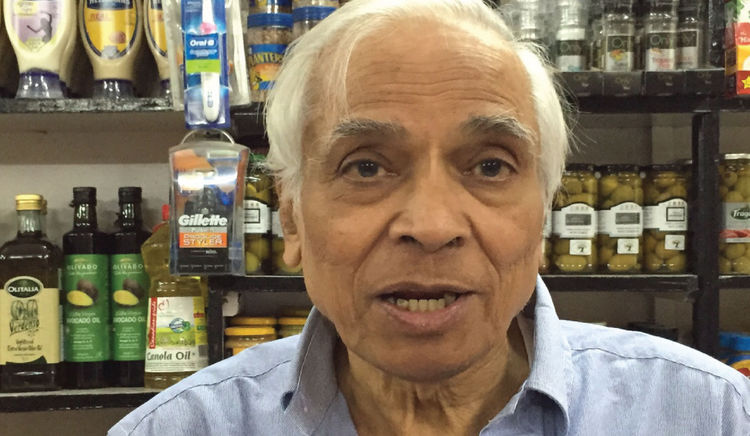 Last year, disaster struck twice at two neighbouring icons. The owner of The Book Shop in Jorbagh passed away after a battle with cancer. And next door, Steak House was gutted by a fire that threatened to engulf the big daddy of all food stores in the capital. Steak House used to be jointly owned by KD Singh of The Book Shop, as well as Kuldip Shenker, his best friend. Both stores embody a certain gentility which will be hard-pressed to find elsewhere in the city.

Fortunately for us, The Book Shop as well as Steak House is still in business and most customers of one store stop by the other as well. Located in a quiet corner of the tiny Jorbagh market with well-manicured public parks all around, it is a landmark address of Delhi, as the city used to be in a more gracious era. Steak House was set up in 1963 by Shenker. The marble top on the counter dates back to that year and the small wooden desk behind the counter is from the 1950s when Shenker was a school-boy (he is now in his mid-70s). Being a jazz aficionado, it is the signature soundtrack of the store. Even the assistants are of advancing years and have never had any other job.

The cognoscenti come here themselves to shop. They have their shopping lists, yes, but last minute purchases are made while waiting for their turn at the cash counter. It is here that Shenker (Kulu to friends) displays a variety of products from newly minted entrepreneurs: croissants made by an expat lady, pickles made by someone with a farm in Himachal Pradesh with organic vegetables, organic vanilla pods packaged in air-tight tubes, even banana bread or an obscure brand of chocolate. The only condition is that Shenker must approve of the taste and quality himself.

His customers, many of whom have been patronizing Steak House since its inception, just need a recommendation by him before putting their money where their mouth is. The only merchandise for which they don’t require a nod from Shenker is the pork and chicken products: they are made in an ante-room of the store, to exacting standards. In fact, you could say that the very name, Steak House, refers to all the meat products which is the core of the store; all else came incidentally, in dribs and drabs. Chicken ham that has no gelatine to bind it (and incidentally, to increase the weight), pork sausages, clove-studded whole ham at Christmas – they all have their long-time customers.

The counter that groans with cheese from all over the country: Kodaikanal, Ooty, Haryana, Kashmir, Nepal and Pondicherry started when the Ambassador of a West European country visited Steak House a few decades ago. He asked Shenker to help to sell two enormous wheels of cheese from a project in Nepal. There has been no looking back since then. Because it is the labour of love of a single person, Shenker picks and chooses every single product category displayed on his shelves. The almonds are supplied by the third generation of a family who is not in the trade any longer, but continues to supply Steak House only because of a commitment made half a century ago. You won’t find supermarket brands of jams and marmalades on the shelves at this store, but boutique brands, made with real fruit from orchards owned, in a few cases, by the companies themselves.

The one worrying aspect is that Shenker, with his trademark high standards, is not willing to hand over the brand he created 50 years ago to a stranger just because he has bags of money. As it is, he is in his 70s and his only child has long settled overseas. There could be a day when Delhi’s oldest delicatessen closes its doors one last time, and the point where gastronomy, gentility and history will fade into oblivion.