In these times of Lockdown, as the Bengali New Year approaches, my thoughts return to April last year. I had done a rather interesting food festival - The Firinghee Thala (The Foreigner’s Platter) in Kolkata. The uniqueness lay in the fact that each dish had origins in an immigrant’s kitchen, the full platter encapsulating the European influences that have crept into Bengali cuisine. So, we had dishes like the Armenian Cabbage Dolma, Portuguese Artisanal Sausage Curry, Jewish Chicken Roast, original Raj-style Mutton Jalfrezi, Topshee Muchee (Mango Fish) Fry, Rohu French Korma and the star dish being the Chingri Machher Chine Kebab, the Bengali version of the French Lobster Thermidor. All these dishes have hugely comforting Bengali flavours, having incorporated the regional influences.

Bengali cuisine can then safely be said to be the first real example of Global Cuisine, a melting pot of fusion which started centuries ago. Politically, ancient Bengal was an area of shifting seats of power with fluid borders that included modern Bihar, parts of Orissa, all of present Bangladesh and beyond. Chittagong, in erstwhile East Bengal, now Bangladesh, and Tamralipta, in modern Medinipur district of West Bengal, were amongst the largest and most thriving of ports in South Asia. They hosted Arab, Turk, Persian and Armenian merchants, many of whom settled in the region and the first kebabs, qaliyas, pulaos and Mediterranean dolmas were born.

As an aside, the story of the Jahazi Qaliya seems appropriate here because it is totally unknown in the rest of India with medieval Mughal-influenced cuisine having appropriated all ownership. This forgotten dish was carried aboard wind sail ships from Chittagong on the route to the holy cities of Mecca and Medina. It was made with either fish or meat and cooked in ceramic jars with olive oil for longer preservation. The use of olive oil has disappeared but the fish qaliya in many creative avatars has remained through millennia.

Merchant ships from Tamralipta sailed round the coast of Burma to the Malay Peninsula, Indo-China, Ceylon, the coasts of Africa and the ports along the Arabian Sea, and had distinct links with the Roman Empire. They came back laden with influences that were warmly embraced. The coconut-milk laden Chingri Machher Malay Curry, once referred to as Ceylon Curry or the generous use of cinnamon is an example. Bengal’s Jaali or Soru Pitha, a fine rice flour lacy net bread, is no different from the famous Malaysian Roti Jala. Cut to medieval and modern times when Bengal was once again the jewel in the Mughal and British crowns. The new conquerors flooded the region with rich ingredients, styles, techniques and exotic fruits and vegetables. European trade saw the Portuguese, Danes, Dutch, French and finally the British settle in Bengal with Calcutta emerging as the capital of the Empire. The Bengal Province then included modern Assam, Bihar, Orissa and Myanmar and stretched right up to Malaysia and Singapore. The influences are evident all around beginning with the famous Bengal chenna sweets, a legacy of the Portuguese soft cheese-making factories in Bengal, the celebrated Smoked Hilsa, derived from European techniques, varieties of breads introduced by the Mughals and later the French, and last but not the least, the Bengali chops, cutlets, roasts, gravies with roux and baked puddings.

As Calcutta grew, migrant labour from various parts of the country flocked to the burgeoning metropolis bringing in delectable street foods like the Puchka, Jhal Muri, Ghugni and the famous Kathi Roll. Two waves of Chinese migrants in the 18th and 20th centuries saw India’s only Chinatown, leading to Bengali-appropriated street foods that went by the names of Chiney Chorchori (Chinese Mish-Mash), Chinese Chaat and Chinese Shingara (Samosa)!

The devastating partition and the fall of Calcutta as a thriving port city threw Bengal into turmoil. Gastronomy from the mid to the late 20th century stagnated and innovations were at a premium. The tipping point has come with the new millennium, the expansion of the city, new-age enterprises, and well-travelled millennials seeking new experiences. Shawarmas and Baos vie with the Kathi Roll as do the biryanis with risottos and momos with ravioli. The Great Bengal Culinary Rennaissance 2.0 is here.

Watch this space for more!

Pritha Sen is a former Journalist and culinary expert. She is a Gurgaon-based Development Consultant who has immense knowledge on history of food and specializes in recipes from the Eastern parts of the Indian subcontinent. 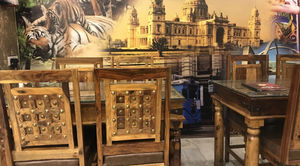