“Raw fish? Ewww. I’d never eat it!” Have you ever said that? Then, it’s time to change your mind about sushi that was invented in Japan but repackaged in India.

• There are several dozen types of sushi. Only nigiri always features raw fish. If you don’t fancy the idea of eating uncooked fish, try one of the many kinds of rolls.

• Sushi rolls contain pickled plum, avocado, cream cheese, smoked salmon, crab stick (the last two are processed in the same way as chicken salami or ham, so no need for further cooking) in combinations that the chef thinks is attractive.

• Rolls always contain rice and a sheet of black seaweed (no ‘fishy’ odour, don’t worry) plus a tiny bit of wasabi – the pungent horseradish paste that no sushi is complete without.

• Maki rolls have one or two fillings, surrounded by rice and wrapped with a sheet of nori, which means they’re black outside.

• Uramaki is fatter than maki. It has three or four fillings, wrapped in nori with rice outside. As white is a boring colour for sushi, flying fish roe coloured green or orange is sprinkled over the rice.

• Futomaki is the fattest of the rolls, with several fillings of which omelette and shitake mushroom is always present.

• All types of sushi are eaten with chopsticks or with your fingers. You must never break a sushi into pieces: the whole thing goes into your mouth in one bite.

• You moisten one end of the sushi with a drop of soy sauce. You do not drown it, causing the sushi to disintegrate.

• You never mix wasabi and soy into your bowl. It is akin to mixing pickled onions and pudina chutney together.

• The pale pink ginger arranged into a flower is a palate cleanser between bites. Eat one ‘petal’ at a time.

7 Unusual Summer Desserts You Must Try In Delhi NCR 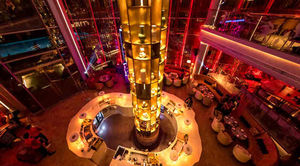