The Americana of Whiskey 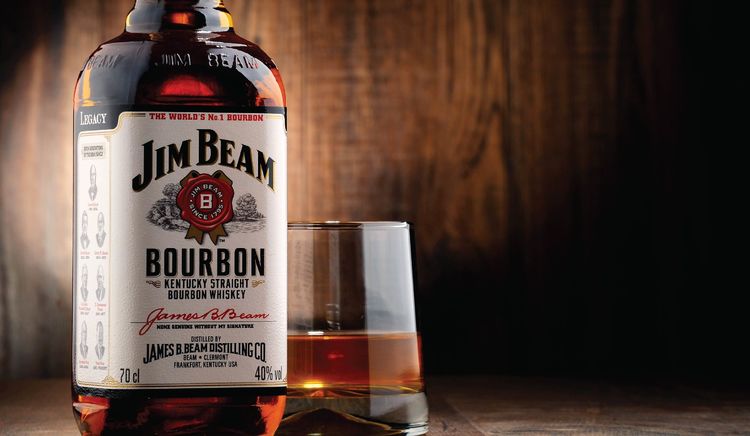 Talk whiskey and most people instantly think of a dram of Scotch – the blends and single malts have come to be associated with unmatched quality and seem to make a snob out of nearly every barfly. While Japanese whiskey is also highly regarded, it remains prohibitively expensive or inaccessible. Try putting bourbon into the equation and you are likely to be brushed off before you can finish saying ‘Jack and Coke’.

Can an inexpensive bottle of Jim Beam White, a Kentucky Straight Bourbon Whiskey match up to the highly feted Johnny Walker Black Label? Maybe it can. Read on to find out why.

The birth and journey of American whiskey is mirrored by the birth of America. Arriving on the backs of hardy Irishmen and Scots, the libation provided much needed vigour to the immigrants as they colonised unexplored lands, battling nature, wolves and local Indians. The earliest spirits were a product of nature’s bounty – the settlers were familiar with the science of distillation, and used it to convert unused grains into whiskey.

The first whiskies were made from wheat and barley, before the colonisers realised that the hardy rye was even better suited for the new continent. Sooner than later, someone figured out that the native corn, with its high fructose content, could be distilled to an even more bountiful alcohol. To this day, corn remains a defining characteristic of American whiskey.

The early un-aged, colourless whiskies were called White Lightning to capture the jolt of alcohol as it ran down the body. Gradually, folks began to notice that the whiskey became more palatable if it was allowed to mature in wooden casks. Still very much a farmer’s product, larger cooperatives popped up in towns that would buy the whiskey from the countryside and then age it in warehouses. Then, in what might have been an accidental discovery, a supplier surreptitiously casked his whiskey in a burnt oak barrel. The high temperatures drive moisture out of the wood and caramelise the sugars, imparting a mellower taste to the spirit. The rest is history. Another fun fact: bourbon can only be made from new, charred oak barrels. Guess what happens to the used barrels after they are done maturing the bourbon? They are shipped off to Scotland, where they are prized for ageing single malts!

As for the bourbon vs scotch debate – the key determinant is not the number of years the spirit has spent in the barrel, but rather how much it has matured. In distilleries around Kentucky and Tennessee, the temperatures soar during the summers and fall sharply in the winters. The summer heat expands the spirit further into the wood and when the temperatures fall in the winter, it seeps back out after having imbibed the wood’s flavour, colour and aroma. The Scots, blessed with a staid variation in climate, need much more time for this process. Therefore, many experts assert that a bourbon matures three times as much as a scotch, per year.

Over the centuries, bourbon whiskey became the drink of choice for America, something they could call their very own. It might have been instigated by revolutionary sentiments, when the British imposed heavy taxes on the import of Molasses from the Caribbean. It certainly played its part in financing the Revolutionary War; in fact, George Washington was a distiller himself who settled down to open what remains one of America’s longest running distillery. The Civil War is rife with tales such as Southern Regiments distilling their own whiskey – the spirit anaesthetised much pain and guilt. The Prohibition became the bourbon’s greatest antagonist, as tipplers switched to gin, which was easier to manufacture on the sly. However, it was in the decades that followed that the American whiskey industry rallied and established itself as a spirit to be reckoned with. So much so that, in 1964, the US Congress ratified bourbon whiskey as a distinctive product of the United States!