All about South India's Biryani evolution 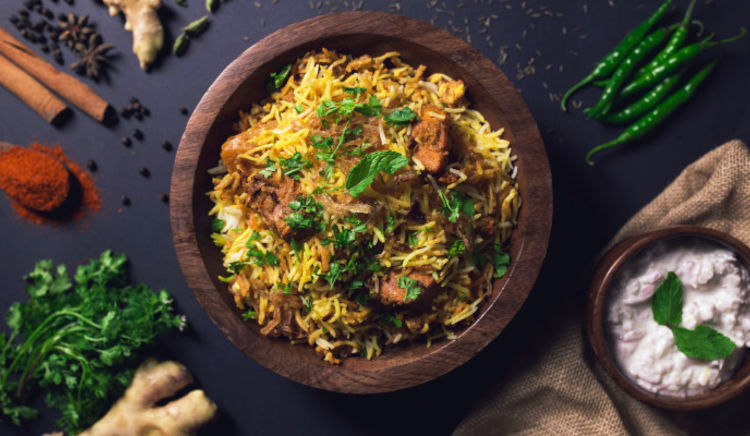 Biryani is thought by many as a dish that traveled from Iran and derived its name from Birinj Beryan meaning fried rice in Farsi. But that thought process is disputed. Biryani, as we understand the dish in India or South Asia, has no similarity to the dish called Beryan in Iran, which’s a minced meat dish pan-roasted and served on a flatbread (Naan). The Biryani (with rice) is a 100% Indian / South Asian invention.

Indian food history is not a well-documented subject and there are many theories to the origin of the Indian Biryani. Some say that it’s Lashkari food that was prepared as a one-pot meal for marching soldiers of the Mughals. Other theories point out to Ain-I-Akbari, the compilation about Emperor Akbar’s administration and Mughal culture including recipes from the royal kitchen. Another theory mentions Shahjahan’s court and Queen Mumtaz Mahal’s involvement in creating this dish. 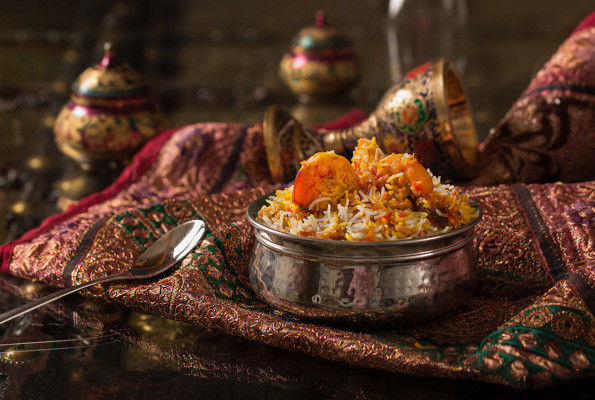 The Mughal court had a big hand developing Muslim cuisine in India and many of the Biryani styles we see today can be traced back to this influence. But the dish was also further developed by many of the Nawabs and Nizams across India, who gave it regional variations. One aspect of Biryani I find fascinating is the evolution of this dish in South India. Biryani is of course now the generic world for rice and meat cooked together. What’s a Pulao and what’s a Biryani always makes for good debate. 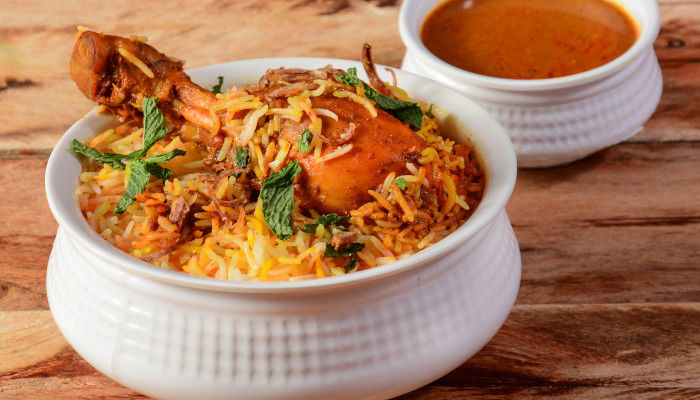 Hyderabad is one of the more famous places for Biryani in South India. Hyderabadis love rice and can eat big quantities in one sitting. Serving bowls with false bottoms are quite the norm in many Hyderabad restaurants to make the Biryani look bigger in size and quantity. Most weddings in Hyderabad serve two variants of the Hyderabadi biryani - Zafrani biryani and Sofyani biryani. The third version is the Katchi Biryani, which one would most likely find inside Hyderabadi homes. But I don’t know if the Katchi Biryani originated or is exclusive to Hyderabad. I’ve also seen Dhakai versions of the Katchi Biryani. 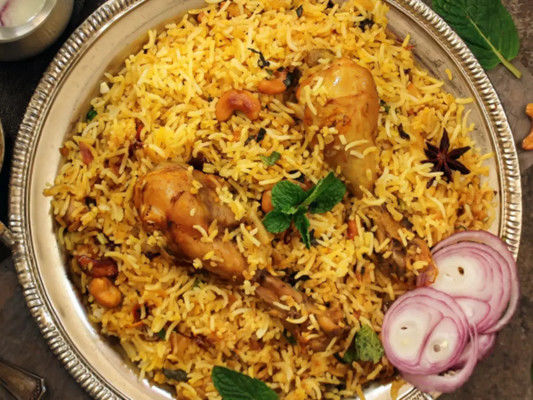 The Zafrani biryani is made using long grain Basmati rice and the masala is flavored with whole spices, onion, ginger, and garlic. The Biryani gets its characteristic orangish color from the saffron soaked warm milk that is poured on top of the rice, just before putting it on dum. The Zafrani style is the most widely available version across Hyderabad. But as saffron is expensive, few restaurants now use it and many substitute it with turmeric or food color. 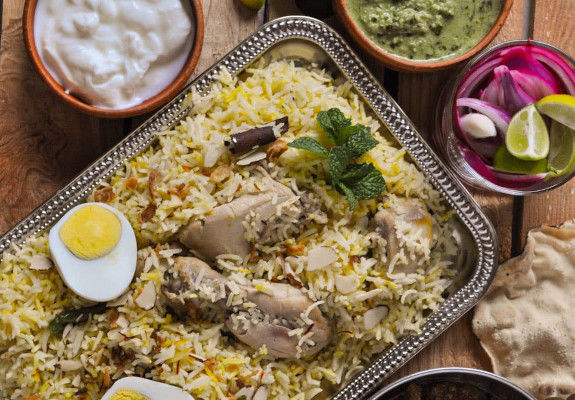 The Sofiyani biryani is most likely found in weddings or in Hyderabadi homes. It’s delicately spiced and white in color, which comes from the milk and almond paste used in its preparation.

When in Hyderabad, I’ve always enjoyed the biryani at Shah Ghouse at Shah Ali Banda in Old City. Though they have multiple branches across the city, I always prefer going to their original outlet. The Original Bawarchi at RTC crossroads, Café Bahar in Basheer Bagh and Meridian hotel in Panjagutta also do a tasty version of the dish. Of course, the big daddy for Biryani in Hyderabad is Paradise, but you need to go to their original outlet in Secunderabad. 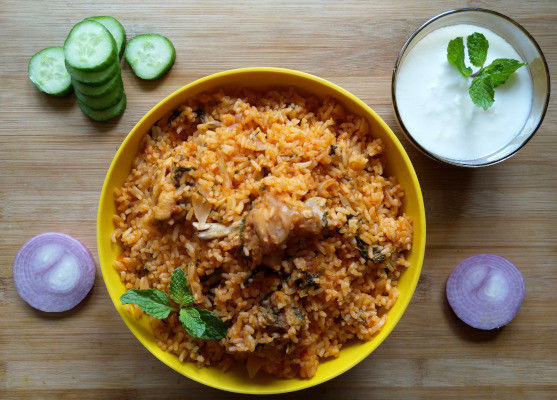 Ambur Biryani is now a very popular biryani style, both in Bangalore and Chennai. Ambur is a small town in Tamilnadu, equidistant from both cities. A few years ago, I decided to make a trip to Ambur to taste the original version of the dish. The Ambur Biryani is different from others because of the rice variety used. Instead of basmati, a local short-grain variety called Seeraga Samba rice is used. The Biryani uses an onion-tomato base and a paste made with ginger, garlic, and red chili with other spices. The red chili paste is what gives the Ambur Biryani its distinct reddish color.

The brand that’s really made Ambur Biryani famous is Star Biryani. But I prefer the Biryani at Rahamania, a small joint tucked away from the main highway. The Biryani here is served on banana leaf and comes with raita, spiced onion, Sherwa (a kind of spiced gravy for Biryani) and is quite tasty. 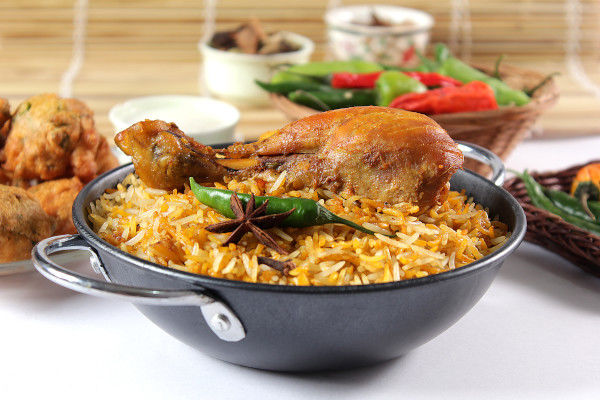 Dindigul is a small town in Tamilnadu close to Madurai. Thalapakkati is the brand that’s made the Dindigul Biryani famous. The name comes from the typical headgear called Thalapa which the founder used to wear. Dindigul Biryani much like Ambur Biryani, uses Seeraga Samba rice but it's the blend of spices used in each recipe that makes them different. Dindigul Biryani uses pepper as the dominant flavor along with cloves, mace, and other whole spices. Apart from Thalapakkati, the other places in Dindigul serving classic versions of this Biryani are Ponram and Venu Biryani Hotel. 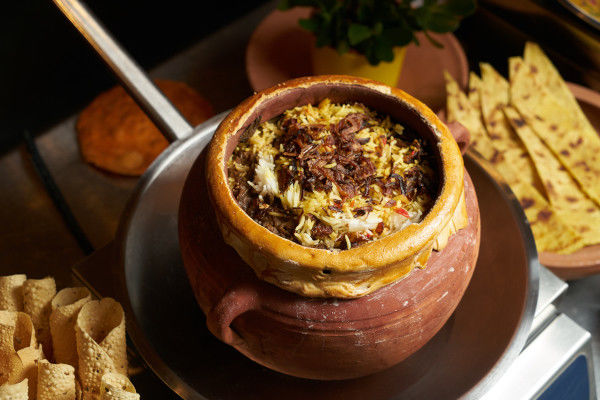 You can be sure of two things with Telugu cuisine. It’ll be spicy and it’ll be sour. Telugu cuisine is now the politically correct terminology for what earlier was known as Andhra cuisine. Though the state was earlier undivided, there were always three clear divisions - Telangana, Coastal Andhra and Rayalaseema. Though people in all three regions speak the same language and are culturally very similar, the divisions run deep. The similarities and divisions also extend to the food of these regions. Andhra food is very coastal influenced and because it’s also the rice bowl of India, a lot of rice is consumed here. Telangana has both a rice and millet-based diet and has influences from the Muslim cuisine of Hyderabad.

It’s somewhat difficult to say how old is the tradition of Kunda Biryani, but it's now become quite popular across Andhra Pradesh. The Kunda Biryani is inspired by the Hyderabadi style and uses long grain Basmati, but the overall spicing is more Andhra, with the overzealous use of both fresh green and dried red chilly in the recipe, which’s typical of Andhra cuisine. 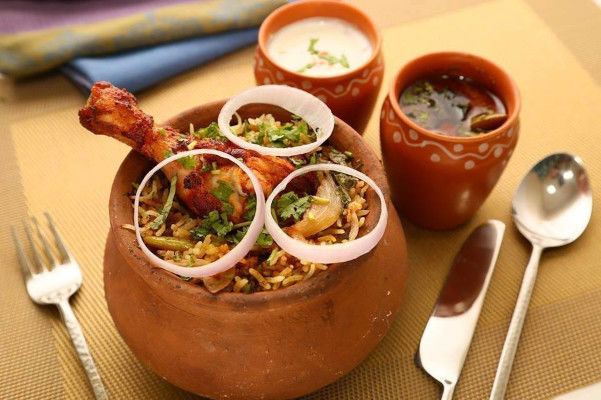 Kunda Biryani is made by cooking rice and meat separately in the ‘Pakki Biryani’ style. Put in small earthen pots, sealed with a lid, wrapped in silver foil, and put on live coals or fire for dum. You get Kunda Biryani all over the state and every town has its own favorites. I’ve heard a lot about the Ravulapalem Kunda Biryani. Ravulapalem is a small town next to Rajahmundry and hope to visit here one day.

Another style or rather ingredient that’s gained popularity in recent years is the Ulavacharu (horse gram) Biryani. Some restaurants call it Ulavacharu Biryani and others call it a Pulao. Ulavacharu adds a unique and distinct flavor to the dish and makes it special. One of my favorite places for the Ulavacharu Pulao / Biryani is Ulavacharu restaurant in Jubilee Hills, Hyderabad. 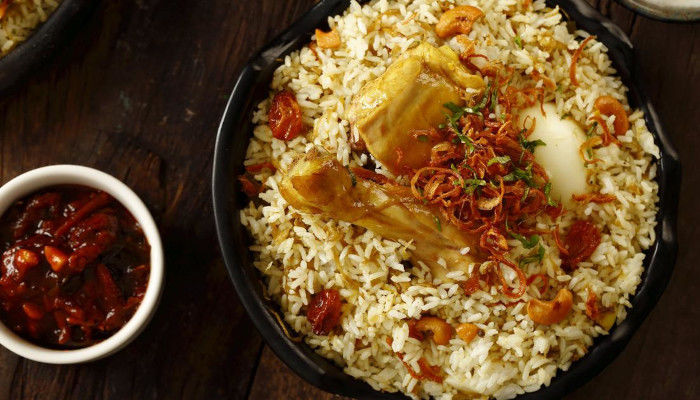 This’s a Biryani style from Kerala that’s gained popularity and spread to other parts of South India. I’m not really sure why has the Thallassery Biryani caught everyone’s attention and not Kozhikode Biryani. After all, the most famous Biryani restaurant in that region is Paragon, which’s located in Kozhikode.

The Thalassery Biryani uses short grain rice locally called Kaima, similar to the rice used in Ambur and Dindigul Biryani. The meat is cooked with whole spices including pepper and the masala has a base of onion flavored with a lot of garlic and coriander powder. The rice is made in the style of 'ghee rice' and then layered with meat and given ‘dum’. 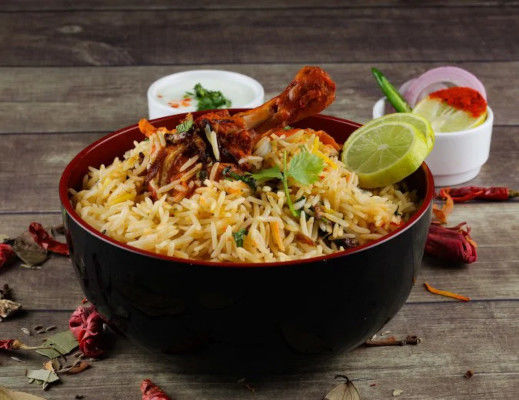 Not many know about the Kalyani Biryani. It’s considered the poorer cousin of the Hyderabadi Biryani and one gets this in small Biryani joints mostly in the outskirts of Hyderabad and a few outlets within the city. Goat is the preferred meat in Hyderabad and most restaurants serve this. But the Kalyani Biryani is exclusively buff and the masala is made with an onion-tomato base, using normal spices like jeera and coriander.

After the Police action of 1950, chefs of various 'Devdis' in Hyderabad were without a job and some of them set up their own roadside Biryani stalls. One of them, Dawood, set up his stall at Murgi Chowk selling Kalyani Biryani. This became a huge hit and the cult of the Kalyani Biryani spread across Hyderabad, especially the outskirts and other areas where many found goat meat to be expensive. The original Kalyani Biryani shop in Murgi Chowk still exists. Dawood passed away some years ago and his sons now run the shop. 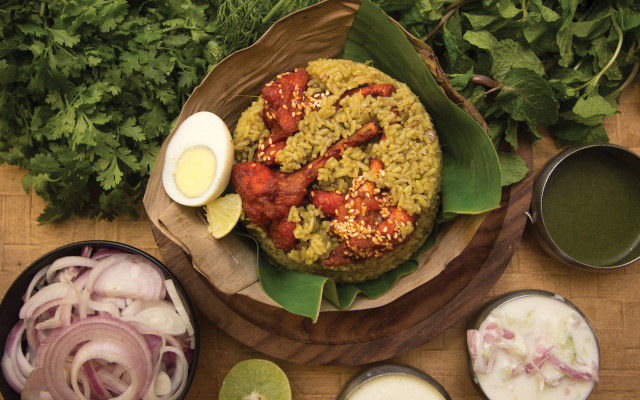 Though Bangalore has a vibrant Muslim culture and you get excellent Biryani at Rahham’s, but the Biryani that’s caught everyone’s fancy is the Donne Biryani. This style originated from the iconic Military hotels of the city, where the Biryani is served in bowls made from Arecanut palm leaf. But most of the older military hotels call it just Biryani and not Donne Biryani. Some even call it a Pulao in their menus. But most of them do serve Biryani in the Arecanut palm leaf 'donne'.

Though you now get Donne Biryani all over the city. I suggest you first try this at Shivaji Military Hotel in Jayanagar. It’s a 100-year-old restaurant where you need to wait at least 30-40 minutes for a table. The origin of the Military hotels can be credited to the Thanjavur Maratha people who settled in Bangalore many years ago. The Thanjavur Maratha rulers were cousins of the Marathas from Pune / Raigad and ruled over parts of South India between the 17th to 19th centuries, including Bangalore for a short period of 50 years. 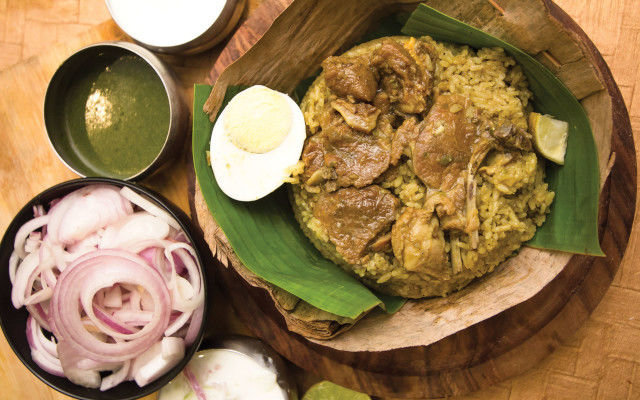 The Donne Biryani has a typical green color, which it gets from the coriander, mint, and green chili paste used to flavor the dish. The rice used is the short grain Seeraga Samba or Jeera rice. Whole spices are used in abundance including lots of black pepper.

Food is ever-evolving and with the diversity in India, it’s essential that we stay in touch with our roots. The South Indian versions of the Biryani have been around for many years but have largely remained within their regional boundaries. But now things are changing and many regional dishes are being discovered and their recipes recreated in homes and commercial kitchens. But all of us need to understand and respect the evolution of Indian food when we replicate classic regional dishes. It’s a heritage that we need to preserve.

Thank you and chowder on!

Mohit Balachandran is a popular blogger and goes by the online name Chowder Singh. A restaurateur by profession, he worked with the Olive Group for 14 years. He also set up and ran SodaBottleOpenerWala and a Bombay Irani Café. Mohit now works as Chief Business Officer at EazyDiner

The Story Behind Eggs Kejriwal Orange and Copper Wine 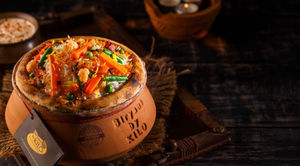 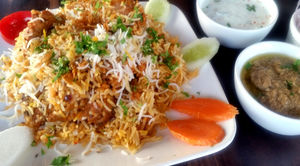