Top 5 Christmas Markets From Around the Globe

Christmas Cheer Across The World A Blanket Of Lights In Copenhagen

Tivoli Gardens entails a small entry fee, unlike other Christmas markets, but it is totally worth It! Fancy an overabundance of 500,000 fairy lights turn this picturesque site into a charmed wintertime heaven that blankets from all sides. It’s like stumbling into a fairy land, which also infolds an assortment of stalls selling the whole lot from Christmassy crafts to home-grown delicacies such as Glühwein replete with Father Christmas suitably joined by his reindeer! Most people head to the lake turned ice-skating rink post they are done with a stroll of the market.

Sprawling in lots of squares offering all things homemade and genuine with stalls being ornamented gorgeously! The horns of gesturing angles are replaced by shooting horns in this charming town’s nativity, but the animals in the manger are actually pet-able. By the way, they do not get snow here as the famed thermal ground puts a stop to any thoughts of a white Christmas, but it is still cold enough to enjoy Glühwein and saunter around stalls selling all things the Christmas markets are made of!

All of the traditions and customs are similar, but the weather and a very different climate make for a unique Australian experience. It is amusing to see that people put out decorations with northern hemisphere snowy Christmas themes included. However Santa wears a summer suit (could be a swim suit too) and his sleigh is pulled by Kangaroos. Plants that bloom at Christmas in OZ cannot be found elsewhere. A traditional Xmas dinner can end up feeling very heavy in hot summer weather (and I write from experience); hence options are a more sensible meal of a buffet with seafood or cold ham, turkey and salads.

Orchard Road is lit up with a remarkable and bright Christmas illumination display and literally all the shopping malls look like Christmas presents. Interestingly Tanglin Mall does an amazing snow display, which is a large blow-up Christmas display and a machine spouting ‘snow’. Locals and tourists love to drench themselves in it. Colourful Christmas floats make their rounds every night. So be on the lookout! There are loads of free performances by churches at various locations on Orchard Road like carols, pantomimes, dramas and dance.

Most bakeries in Goa bake their cakes comparable to the British traditional Christmas cakes to be of Portuguese in origin, that said, the Portuguese do have Christmas cakes, the bolo rei being the most distinctive but either way, it has more likenesses to other European yeasted Christmas cakes such as the German stollen but nimbler and alike the Italian panatone. The same can be said of other Christian societies in India, such as Kerala or even up North, which are equally anglicised! The Anglo Indians have kept the Christmas cake alive and places like the Lalit Great Eastern Hotel Kolkata and their bakery that is steeped in history (to bring that relic thriving the enormous Side Flue bakery oven, which was replacing the old bee hive oven has been used in parts and pieces in the present bakery to give the same visual feel) including Flurys and Nahoums, a tiny family preserved Jewish bakery in Hog market!

Merry Christmas on that note!! 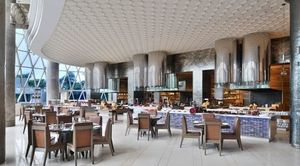 The Celebration of Holi over food in Kolkata