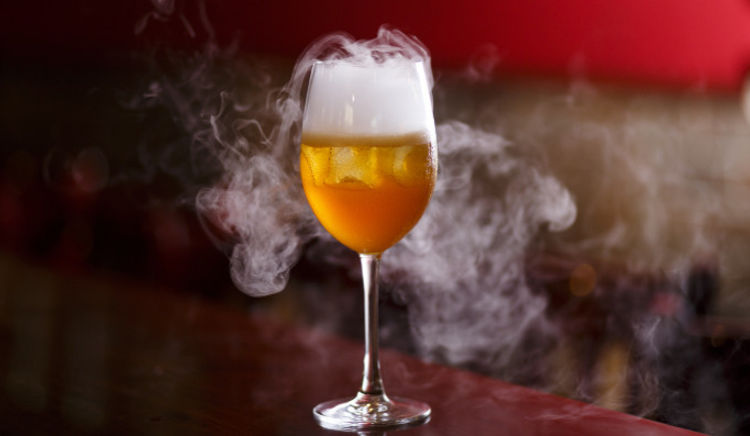 This is the best part of the year when it comes to festivities in India. In Kolkata, it is just when the noises of the Dhaakis and the biggest celebration of Bengalis Durga Puja start to fade away, Diwali comes in. Kolkata also has Kali Puja, which a day before Diwali. So it’s an extended celebration of 2 days. The general mood all around is upbeat and people cannot wait to get soaked in the celebrations. When it comes to Diwali, the festival of Lights, these 5 restaurants and pubs serve cocktails that are must try this season.

One cannot forget the Goblet of fire being served as a part of J.K.Rowlings birthday celebrations. The Bengali Mary, The Garden of Zen, The Valley of Panda all have become favourites of the cocktail lovers of the city. If there is one drink you need to try this season then it is the DIY Dusk to Dawn which has Beefeater London Dry Gin, Electric Bitters, Asian Sap with Lime and Tonic Cordial. Be a part of the fun when the colour of this concoction changes from blue to purple to pink to Red

With the new interiors and re-launched new menu, this place has got some great food to offer and when it comes to cocktails, our recommendation will be a knockout drink called Southern Express. The 5 dark spirits of Dark Rum, Whisky, Tequila gold, Brandy and Kahlua with coke and lime will definitely get you high. If that was the end you thought, then try out the Pauwa cocktails. Served in small Pauwa bottles these have flavours from all across the country like - Go Goa Gone, Jaipur Gulabo, Pondy rush, Kollywood pop, Janta Bar, Shimla Rum do and Nagpuri Santra.

Pocket Pinch: The Pauwas come at Rs 450 plus taxes whereas the Southern Express comes at Rs 575 plus taxes.

Since the time Monkey Bar has opened in Kolkata, be it Manga, Hipster Smash, Old fashioned on Camac or Copper monkey, each have earned loyalist followers over the last year. One cocktail which is potent and slowly grows into you with its subtle flavours is Mad Men. A whisky based drink with coffee, orange shrub tonic and rosemary, this drink is smooth and if you are whisky lover then you won’t stop at one.

The food and the cocktails of Grid have already evolved from being the talk of the town to setting benchmarks. The Chaurasia Julep, Smoky Tennesee, Rosy Gimlet, Trio Diaquiri, each one is a winner in its own way. But since it is Diwali, how about embracing the Skull Jamaican Candy - the strong (to understate it) Dark Rum cocktail served with Brandy and Jaggery is a potential threat to knock you down soon.

The last but not the least in this pub hopping shall be Irish House. There are community cocktails like The Irish terminator, The Hurricane, Sangria Pitcher and there are signature cocktails like Inverted Bird (Beer based), Irish Trash can and some more. We recommend which is Vodka with apple-infused tea topped with Orange zest and Kafir Lime smoke.

Diwali is all about celebrations and what else can be a better way than to bring in the festivities with these spirits to enjoy to the fullest.