A Cake Mixing the Goan Way

It is the Christmas cake mixing ceremony, which commences around this time 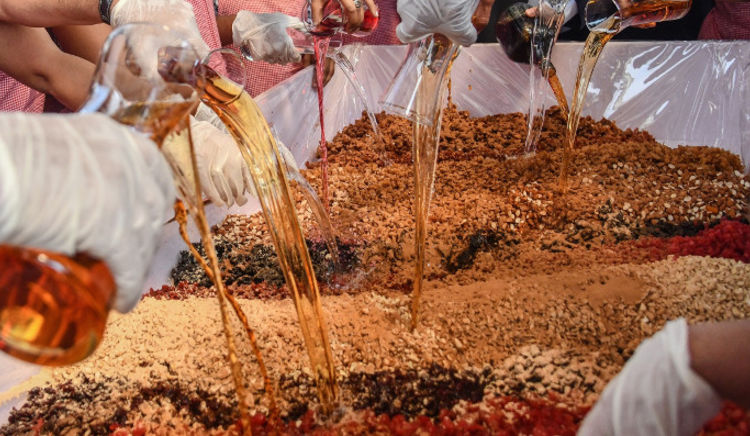 A nip in the air with lights signal the heralding of the year coming to an end. Christmas will soon be upon us and the time starts now, to gear up for the festivities and the food feast ahead. Weeks before Christmas have always been a family time where everyone met up on the jubilant occasion and got to soak all the dry fruits together along with the spirit of Christmas. These days hotels play host to patrons, to ring in the festivities to get one’s hands dirty, with gloves though. To mix a lot of fruits, dry fruits and the likes in a huge vat along with alcohol. Yes, it is the Christmas cake mixing ceremony, which commences around this time, approximately 6 weeks before Christmas.

The lovely folk at Kenilworth Resort down south in Majorda-Utorda heralded the festivities with their annual traditional ceremony. 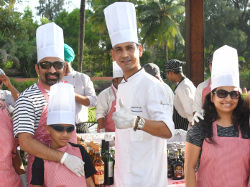 Chef and his merry food elves

The celebrations hosted by the affable General Manager Mr Vikas Bhatnagar and Executive Chef Merrajuddin Ansari allowed us to witness and partake in getting our hands dirty to contribute to the cake that would be baked this December and distributed to guests and well-wishers alike. 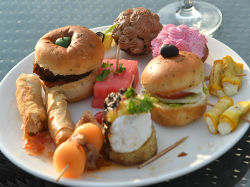 With canapés and drinks afloat many socialites and invitees in attendance along with in-house guests, the lush green lawns were filled with mirth, frolic and guffaws, as the sunset on this magnificent property. The thrill of getting the ingredients for the Christmas cake mixed together in a big bowl put a smile on everyone’s face.

While this is considered to be fun it also has a religious significance - a lot of preparation goes into the process. Did you know - during the erstwhile times, an era long ago, the cake mixing ceremony was a family affair. But the ‘inns’ which also did them on their premises considered their guests to be family, so they too were included as part of the ceremony. 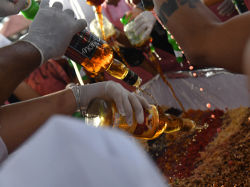 Spirits and mix away

Fast forwarding to this century, it has now become a modern-day camaraderie as part of ushering in the Christmas spirit. Cashews, almonds, walnuts and other assorted dry fruits along with candied ginger, prunes, raisins, tutti fruttis, glazed cherries and a whole lot of other items are all the ingredients which go into the cake mixture. Lest not forget the freshly ground spices and cinnamon sticks. All these mixed in a vat by us eager folk contributed to the ‘spirit of the season’ with the rum, whiskey, wine and brandy to soak the mixture in.

Come December and here is the recipe you can create with the aged produce that you had kept locked off in a corner of your house, patiently waiting on till Christmas to get the perfect little Plum Cake.