A Chef and his Grandmother at SodaBottleOpenerWala Chefs are more often than not, inspired by their mothers and grandmothers and develop an interest in cooking owing to what they see in their kitchens at home, right from childhood. Chef Danesh Vakshoor of SodaBottleOpenerWala is no exception.

The vast repertoire of dishes from this cuisine are made, using some specific ingredients and most of these dishes are fairly uncommon. Dishes with nuts, dry fruits, within them originated in Persia, while ginger, garlic, chillies and spices, add the Indian flair. Together these are a great combination which will entice the palate of gourmets.

This Zoroastrian Irani menu is Persian inspired but is a bit different from the classic Parsi or Iranian dishes. Chef Danesh has worked closely with his grandmother to recreate some of the recipes that evolved over the century, during his family’s time in Mumbai. The result is an amalgamation of different flavours, which are reminiscent of Iran, from Chef Danesh’s grandmothers’ time, skilfully blended with Indian flavours. 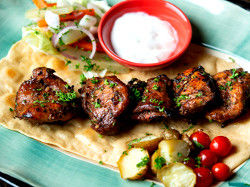 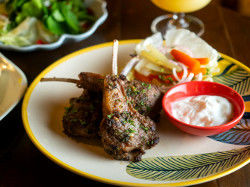 The eclectic menu includes Pomegranate Soup and options of Chicken Torsh Kebab, Koobideh Kebab, Chicken Shish Kebab and Lamb Chop to start-off one’s meal. The mains on the menu are Chicken and Plum Stew with Pollow - Chicken cooked with plum, onion, tomato paste and paprika. Served with Pollow, Mutton Gormeh Sabzi with Noon Bread - Mutton stew with a selection of greens like spinach, cilantro, fenugreek, Mutton Adas Polow, a rice dish with layered mutton mince and lentils and eggplant stew. The flavours are distinct and the ingredients, unique and characteristic of this cuisine.

Chef Danesh’s grandmother has had a big influence on his cooking. She hailed from Iran as a child and learnt Persian food from her mother. But because typical Persian ingredients were not available in Bombay, many of these dishes were cooked with local ingredients and took on a completely new direction.

Any Zoroastrian will vouch for the fact that Navroze, is all about good food. So relish these home-style delicacies by Chef Vakshoor, this Navroze and partake in their festivities.