In a restaurant, while ordering Sushi you must have come across another dish by the name Sashimi and got confused between them. Well, both are Japanese in origin but are different dishes. Let us see the difference between Sushi and Sashimi.

Sushi means ‘sour-tasting’, and the dish defines it well. The main ingredient for sushi is vinegar-soaked rice. Therefore, it tastes sour. The traditional sushi features raw seafood, but nowadays, cooked seafood, veggies and various kinds of meat are also included in the dish.

Some of the best Sushi Rolls include -

Bottom Line: Sushi doesn’t need to include the raw fish. Only vinegar-rice are considered.

Sashimi, on the other side, means ‘pierced body’. It refers to a delicacy of thinly sliced fish or different types of meat which is served on a bed of daikon. Usually, it is eaten plain except for the Soy Sauce. This allows the flavour of the meat to shine, which looks attractive. Sashimi-grade fish is one of the highest quality of seafood. Some of the different sashimi includes Salmon, Yellowtail. Sashimi is made from saltwater dwellers because the freshwater fish have higher risks of parasites. Most popular types of fish served as sashimi are:

Bottom Line: It is a thinly sliced raw seafood which is served without rice.

Cook at home and stay safe!

Q. What are the top ingredients for home-made sushi?

A. Some of the ingredients needed to make Sushi at home are Sushi Rice, Nori, low-sodium Soy Sauce, Chia Seeds et al.

Q. What are the different types of Sushi?

Q. Is Sashimi served before Sushi?

A. Yes, sometimes Sashimi is served as an appetizer before Sushi.

Krishna Arora is a solo backpacker traveller who travels across the globe, meet new people every day, listen to their story of life along with that try the most famous and delicious dishes of that particular place. He loves to write his travel experiences, click photographs, volunteer at different NGOs, backpacking hostels and much more. For more stories and photos, follow him on Instagram @krishnaarora_official. 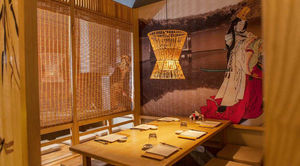