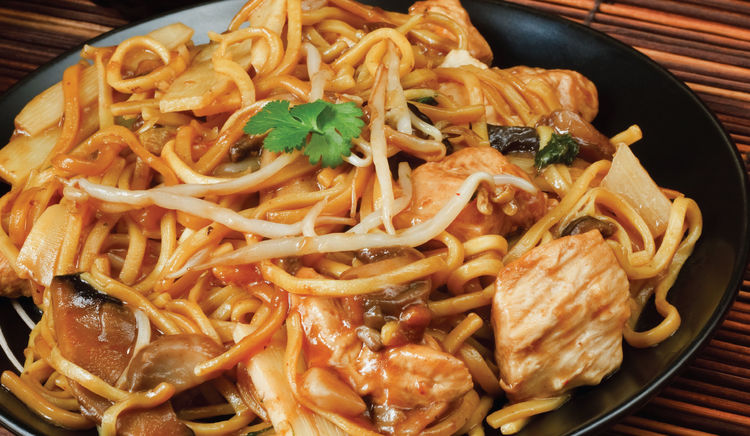 If you ever start reading up about the dish called ‘American chop suey’, say precisely at the time you decide to eat it, you will be wondering what you are really eating.

In India, American chop suey is mostly a mix of vegetables (and meat, if you like) tossed in a sweet tomato-based sauce, and served with noodles – crisply fried, or boiled.

Truth be told, there is no logic to explain this dish and yet, for most Indian-Chinese fans, the desi version of the American chop suey can easily be considered ‘comfort food’.

Born out of American’s fascination with Chinese food, the chop suey began as a thick broth made with leftover meats and vegetables such as cabbage, peppers, etc. The chop suey, which is what it is called, soon began to take on different avatars, mostly in the United States. From being serviced with rice, stir-fried noodles stepped in as an occasional replacement. Incidentally, in America, what is called ‘American chop suey’ is a macaroni dish made with ground beef.

In India, the American chop suey is neither Chinese, nor American. There is really no point trying to wrap one’s head around a dish that probably was invented as an afterthought. There is also something called ‘Chinese chop suey’ on the menu of Indian restaurants, and that comes in a white broth; it is close to a thickened stew with vegetables and/or meat, and soft noodles. However, in India, nearly every Chinese restaurant serves this dish, and most of us even have our favourite places to get it from. The fried egg on top of the chop suey is a must, if not for added flavour, then for form’s sake. Here is my list of favourite Indo-Chinese restaurants in Bengaluru that serve a decent chop suey.

Bangalore Mandarin – The American chop suey here is a hit or miss. While I like most of the dishes to come out of this kitchen, this chop suey sometimes lacks the punch.

Hunan (Koramangala and New BEL Road) – Here you can order both, American or Chinese, and even decide whether you want crispy or soft noodles. The American version has a sweet and tangy tomato-based sauce and, fortunately, is not as overpowering as the dish can get in some other places.

Beijing Bites – This chain has about 30 outlets in the city. And while I have had the chop suey from at least five of those outlets, I find it pretty much similar to each other. At times, the fried noodles are too fried there though, and the sauce can get a bit too tangy.

Chung Wah – I love Chung Wah. They have figured out the city’s palate, and if you are not doing takeaway, the fried egg on top of the American chop suey is one of my favourite things to eat. The sauce is quite perfect too.

Delicacy – It is not one of those upmarket Chinese restaurants, but they do pretty decent food. Here the chop suey is taken to a different level altogether; you get the American, Chinese, Dragon Szechuan, and Hong Kong variety, with either crispy or soft noodles. In simple terms, your chop suey will be served according to your tolerance for spice levels. The American version is the sweetest, and the Chinese is fairly bland.

Popsies – This restaurant surely loves its chop suey. It has got Chinese, American and Szechuan, and you can order the one with vegetables or with chicken or with everything.

Magnolia – This old haunt favours the American chop suey over the Chinese, and apart from being able to order either a vegetarian version, or with chicken, you can also get it with prawns.

Noodle Bar – Here you get the ‘classic’ version, which is basically American – with vegetables and/or meat and seafood. The sauce here is tangier rather than sweet though.

Kim Ling – Located in Banaswadi, Kim Ling serves Kolkata-style Chinese, and therefore cannot go wrong with their American chop suey, especially if you like your sauce sweet. Get the one with crispy noodles though.

1522 – The Pub – Last but not least, the American chop suey at this pub is a must-try. Complete with a bull’s eye on top, and noodles on the side, it is a delight to down this with some beer.

Discover more of the Top Restaurants in Bengaluru with EazyDiner