5 Restaurants in Bangalore to Indulge that Maggi Craving

From being an after-school snack to being the first dish you cooked, to being that go-to dish whenever hungry – post work, after a party, anytime – Maggi is loved by most.

Admit it, the minute you see Maggi on the menu in any restaurant, you have this incredible urge to order it right? Who can blame you? Maggi has been that one single answer to all kinds of hunger pangs for generations now. And restaurants in Bangalore have realized that having it on the menu, in various innovative forms, works well. So here are 5 places that you can head to right away for your fix of Maggi at a favourite restaurant in your part of your town.

How many times have you ended a beer party with a lot of Maggi bowls going around? Well now, at Beer Cafe, you can have your fix of Maggi with your choice of beer. Found on the menu under the Canteen Specials, you can have your Maggi loaded with veggies and spiced up with some Anda Burjee and Buttered Bread on the side; or with some Chicken Tikka chunks thrown in; or with some Spiced Chicken Sausages diced and thrown in! 4 ways, one fabulous Maggi.

Deal: Upload your bill & earn a super bonus of 250 EazyPoints. Get to your free meal faster!
Book a table

The whole theme of Skoolroom is that of schoolroom nostalgia. Little wonder then that Maggi will find its way to the menu. A Cheese Maggi – loaded with a lot of molten cheese that you can stir in your soupy Maggi is how it is served up here. 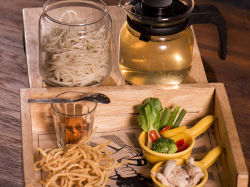 Want to see how the simple Maggi gets a lovely makeover here at The Open Box (ToB)? It is served up in a slightly deconstructed manner, you get this classic Maggi in a soup form, in chicken and vegetarian options, with the seasoning served on the side. Put it together with the way you like.

Deal: Upload your bill & earn a super bonus of 250 EazyPoints. Get to your free meal faster!
Book a table 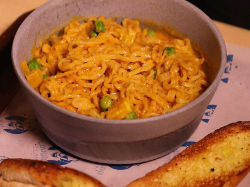 The Laughing Llama is a new kid on the block, but it definitely knows that some good old Maggi is the way to go. Titled 2 Minute Meals, the Maggi Masala versions is supplemented with garlic bread and salad and is available in variants of Chicken and Bacon. Opt for one, or better yet, go for both varieties. 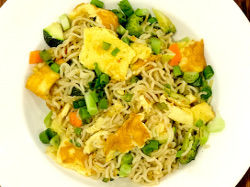 Where there are eggs, you are bound to find a packet of Maggi to give it company. Called the Student’s Favourite at the Egg Factory, it is a version that would make all mummies happy – served up with tons of veggies and eggs, your classic version gets a serious healthy upgrade.

10 Foods You Must Eat In Pune

Popular Locations for Restaurants in Bengaluru See All

Top Restaurants in Bengaluru See All