Chow Down on Chorizo 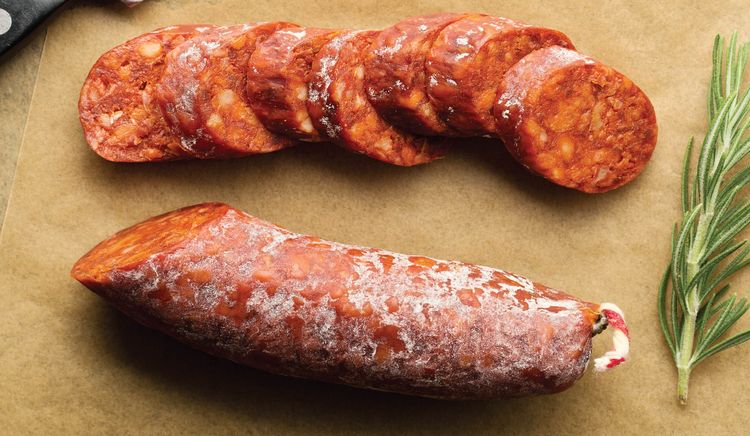 Along with bacon, one of the trendiest and most popular ingredients you will find on menus these days is chorizo. Typically, chorizo is a spicy sausage from Spain (or Portugal), mostly from the Iberian Peninsula. The term is used for both cured meat as well as the sausage that you need to fry and releases a lot of fiery oil. The Portuguese brought their spicy sausage to Goa and, today, the Goans make their own version popularly known as ‘choriz’. Again, they are spicy pork sausages and have become incredibly popular in Mumbai. A lot of restaurants use Goan choriz, while some import their chorizo from Spain, but, either way, these are some of our favourite spicy pork sausage-based dishes in the city.

Choriz pao with home-made poi at The Sassy Spoon – Known for their pretty plates and European flavours, The Sassy Spoon is not where you would normally go to satisfy a spicy sausage craving. However, their chorizo-filled pois are worth trying. Poi is a typical Goan bread and it is served here with chorizo, roasted baby potatoes and chive sour cream. A perfect choice for a quick spicy lunch.

Chorizo fried rice at Imbiss – If you are craving red meat and sausages, then Imbiss is the restaurant you need to visit. It is a depressing joint for a vegetarian, but paradise for a carnivore and particularly a pork lover. While most of their dishes are just meat and potatoes, their Imbiss chorizo fried rice is divine. It is fried rice full of chopped spicy chorizo bits, served with some side salad (more like slivers of lettuce leaves) and a quail egg on top. It is greasy, oily, spicy and absolutely indulgent.

Goan sausage maska pao at SodaBottleOpenerWala – The restaurant might seem like a Parsi one, but the lesser known fact is that SodaBottleOpenerWala embraces Bombay street food and popular snacks as well. Giving their own little twist to the regular maska pao, they serve it up with a side of beautiful spicy chorizo sausage. It is listed as part of their main menu, so it is not a small snack – they take their sausage very seriously.

The Goan at Bombay Salad Co. – One of the most popular salads here is The Goan. It is a fine combination of mixed lettuce, beans, Goan pork choriz, tomatoes, zucchini, peppers and bocconcini mixed in a rosemary balsamic vinaigrette. It is a great way to use the spicy sausage and this is one of the few places that incorporates it in a salad.

The Goan Desi at Desi Deli – If you are like us, sausage should be found in between a hotdog bun. The folks at Desi Deli in Bandra give the traditional hot dog a superb desi twist with the spicy Goan choriz, apple sauce, onions and peppers. Hot dogs are not something you find on most menus and these Indian-inspired ones are delicious.