The love for Italian food in the city is more than evident through the inclusion of various kinds of pasta in almost all new age restaurants and cafés that are mushrooming in the city. However, Kolkatans, till date have been privy to only pasta and pizza and may be, a handful of dishes from the Italian kitchen. There is a dearth of restaurants dedicated to Italian cuisine, barring La Cucina and a handful of smaller joints. Now is the chance for lovers of Italian food to gorge on the best of the dishes in five different city hotels. Part of the Worldwide Week of Italian Cuisine, where there are 130 participating countries, 5 city hotels have taken part in this euphoric journey.

The Hyatt Regency Kolkata has flown in Chef Mauro Ferrari to weave culinary magic on a plate for a week at La Cucina, their specialised Italian restaurant. The Chef is from Rome and is currently with Hyatt Regency in Chennai. Other than having years of experience in working with renowned Italian chefs, he also owns 2 restaurants in Milan and Tuscany. His dishes are modern, while keeping in touch with the tradition too. A few of the dishes which are highly recommended from the menu are pan seared scallops with peas and crispy bacon, chicken diavola – which is basically a tender chicken breast marinated in mustard sauce and other herbs and then pan fried with a coating of bread crumbs. This dish comes with a sauce of mustard, which is accentuated with the flavours from bacon and rosemary, making it a highly sought after dish. La Cucina will be serving this special menu only for dinner till the 27th of November 2016.

The Oberoi Grand Kolkata, known for doing the best at whatever they chose, has brought in Chef Francesco Francavilla, who is currently with the award winning restaurant Vetro in Oberoi Mumbai, to curate and bring to a plate a very special Italian menu. He is known for unique and modern representation of the traditional Italian food. So a simple burrata with asparagus becomes very modern with the inclusion of an asparagus sorbet, asparagus meringue and some chlorophyll mayonnaise, while taking the taste to another level altogether. The chef here loves his pasta, his spaghetti Amartriciana is one to look out for, along with the tomato and honey risotto with pine nuts and herbs. While dining, if you are lucky you can catch up with the chef and ask about his story on being the personal chef of Bruce Willis when he was in Rome. The Italian Week at Grand will be held at Baan Thai till the 27th of November for both lunch and dinner service.

ITC Sonar is having over Chef Vittorio Greco who heads the Ottimo restaurants for ITC Hotels. He has worked in a number of Michelin starred restaurants in Italy as well as Brisbane. And the best part is, he has cooked for George Clooney and...wait for it – Sachin Tendulkar. The sea bass braised with celery, capers and olives in thyme and white wine scented broth is one dish which is a must-try. Another dish which is highly recommended is the ravioli di ossobuco con agrumi e Spezie. ITC Sonar is having the festival at West View Bar and Grill till the 27th of November for dinner service only.

Taj Bengal is hosting the Italian week at The Hub and they have flown in Chef Lorenzo Alessio with a body of experience in working with restaurants in London and Italy. The classic tiramisu is one dish to look out for amongst many other modern Italian dishes. The festival will be there till the 27th of November for both lunch and dinner service.

The Park Hotel at Kolkata is hosting this event at The Bridge for both lunch and dinner service and they have brought in Chef Michelangelo Sparapano who is a member of Italian National Chef Team and has a formidable body of experience in Italian cuisine. The dishes to look out for are pasta al Amatriciana and pizza capri with buffalo mozzarella, parmesan and basil.

The important thing to note here is that even though it is all about the celebration of Italian cuisine and to some extent, educating the world beyond the pizza and the pasta; the Consulate General of Italy in New Delhi has announced that 2 Euros from each plate of pasta al Amatriciana will be donated to the municipality of Amatrice, which is the town in Italy which recently got destroyed in a devastating earthquake.

So, it is time for the people in the city to explore the world of Italian food brought in through this festival. 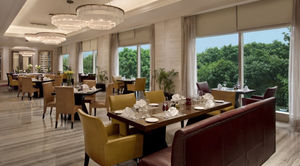