Top 2 Places In Delhi To Get Organic Navratri Thalis

Delhi Boasts Of Two Places To Get Organic Navratri Thalis 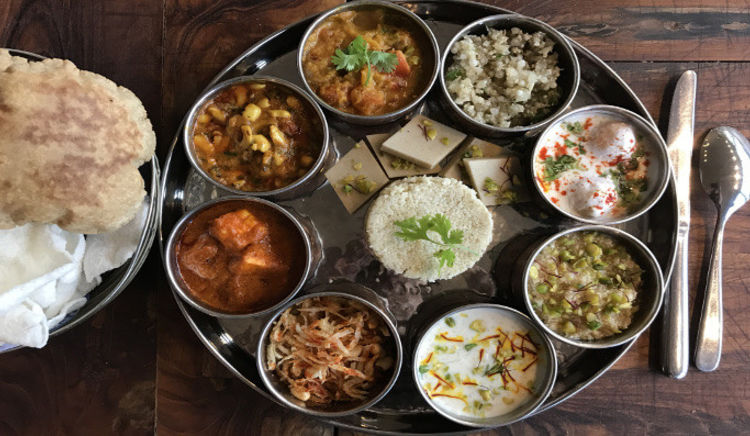 Nine nights. That is what Navratri stands for. It is in these nine days that you need to stay away from your usual eating habits, which translates to no grains, no onions, no garlic and absolutely no meat. Because this festival signifies an interim break between the seasons, people are encouraged to seek out food which is far from what they eat everyday. Which is why buckwheat flour (kuttu ka aata), water chestnut flour (singhare ka aata) plays such an important role for these nine days.

While the city has a number of places that are offering some delectable Navratri fare (Click Here), there are also two places that have gone almost organic with their thalis. Featuring traditional dishes from the Marwar region to those from Gujarat to UP-style, there’s a range of flavours that definitely need to be tasted.

Using consciously-sourced ingredients, both Fire at The Park Hotel and AnnaMaya at Andaz have done a tremendous job with their Navratri thalis.

Fire at The Park

Chef Abhishek Basu’s team has put together a menu that is constantly changing based on the fresh produce they get every day. But their menu on the first day included – Sago Vada with Coconut Chutney, Kaddu ki Subzi, Makhana aur Alsi ka Raita, Khajoor ka Laddoo and Amaranth Kheer. All of which is to be eaten with Kuttu ki Poori and Moringa and water chestnut flour pooris. The idea behind a menu that changes every day is that people get to eat the freshest of produce staying true to the ethos behind Fire.

The Marwari-inspired thali at AnnaMaya is meant to inspire you to eat better. From their locally-sourced Samak Ek Chawal to Paneer Aur Tamatar ki Subzi, Phool Gobi ki Tari, Coconut Barfi, Kuttu ke Aate ka Dahi Vada, Aloo ka Papad and Badaam ka Halwa, the list is seemingly endless. Made by their in-house vegetarian specialist Mahinder Maharaj, this is a treat for anyone who wants to eat a spectacular vegetarian menu, this is the place to go.