A Taste Of Authentic Telangana Food It is a State holiday on 29th March 2017 across Tamil Nadu, and offices in Chennai will close for the celebration of Ugadi, the Telugu (and Kannadiga) New Year. Ugadi derives from the Sanskrit word for ‘new age’, and it is a fine moment to read about the fascinating history of Telugu community in Tamil Nadu, and Chennai in particular.

My friend Chef Shri Bala who recreates medieval food traditions at her pop-ups traced the common heritage of Tamilians and Telugus after the annexation of Telugu-speaking regions by the Cholas and their continued intermingling under the dominion of Chalukya and Vijayanagara rulers. Hence, communities like the Reddiars of Tirunelveli trace their roots back to the Telugu heartland while regions in Andhra Pradesh like Tirupathi and Nellore have significant Tamil influence. In an enthralling piece in The Hindu titled, ‘The fight for Madras’, A. Srivathsan draws up a dramatic account of the Tamil-Telegu stand-off in the first half of the 20th Century for the inheritance of Madras, in the run-up to the inevitable split of Madras Presidency as India drew closer to  independence. At one point of time, political leaders even considered a bifurcation of the city along the Couum River in Northern Madras (about 60 KM from the AP border)! The impasse was finally broken in 1953 when Jawaharlal Nehru refuted demands for Madras as temporary common state capital and Andhra Pradesh was formed with its seat at Kurnool, which was shifted to Hyderabad after the dissolution of the princely state in 1956.

In the latter half of the century, an enterprising community of Telugus in the city developed many of Chennai’s most recognisable institutions: from the vegetarian Chettiar community who hold sway over its vaunted silk and gold marketplaces to the Reddys who run some the Chennai’s favourite restaurants and hotels.  As you might have guessed by now, Chennai has the best array of Andhra restaurants anywhere in India outside of AP and Telengana. Here is where to sample some Telugu food in Chennai –

Hyderabadi cuisine and Biryani at 4 Seasons (Anna Nagar) and Paradise (OMR) – Four Seasons has the tendency to enshroud the quality of its Hyderabadi kitchen under pages of Arabic and North Indian dishes. I love their legitimate Kacchi Biryani, Pathar Ka Gosht and during Eid, Haleem. While I would not hedge my beard on Paradise as Hyderabad’s greatest Biryani, it is undeniably the dish’s brightest beacon. Paradise launched in Chennai last, to much fanfare and many debates. Frankly, I would rather go back for their moreish Hyderabadi novelties like Loose Prawns (think shrimp popcorn) and Apollo Fish, an unusual dish of Basa tossed in turmeric and yoghurt that tastes better than you would imagine.

Reddiar Tiffen at Krishnavillasam - The Home Of Classics (Nungambakkam) and Pesarettu Dosa at ID (across the city) – In between the outstanding Idlis, Pongal and Dosas at Chennai’s famous Bhavans and Mess’ lie Krishnavillasam –  serving food of the aforementioned Reddiar community from Tirunelveli. The top draw is their Chintamani Rava Idli (served after 4 PM), which is a textural medley. If you miss the slightly vegetal heft of the moong dal based Pesarettu Dosas, then you can find one at ID, the spiffy chain of South Indian ‘tiffen’ restaurants.

Full blown Andhra dining at Amravathi (Cathedral Road), Mana Andhra (Nungambakkam) and Sankranti (Anna Nagra) – Amravathi is one of the oldest Andhra restaurants in Chennai and original branch on Cathedral roads still makes you queue up over the weekends for its Nethili Fry and Nattu Kozhi. However, my preferred ode is at the counter of Amravathi Sweets next door with a packet of Pootharekulu –  gossamer rice paper rolls stuffed with jaggery and cashew nuts –  among the most exquisite sweets of India.  Mana Andhra is from the Oriental Cuisine stables and commands a deluge of diners over its true-blue Andhra Thalis and spicy Biryani. I like to ask for endless pours of Ghee to savour with warm rice, Podi and their signature array of Andhra pickles. Sankranti is an international chain which is godsend for Andhra food-lovers of North Chennai, who throng to Anna Nagar for its Bajjilu, Mamsam Vepudu and Nellore Fish Pulusu.

Fine Dine on Telugu food at Malgudi (Savera Hotel) and Madras (The Raintree, Anna Salai) – It should come as no surprise that two of the city’s most prominent Telugu-owned hotels serve first-rate Andhra food at their Pan-South Indian restaurants. I like the unrestrained spicing at Malgudi, whose distinctive Shamiana-like space pays tribute to RK Narayan’s colourful town. Madras is a more genteel option with dim lighting and seasoning that will not challenge your spice tolerance. 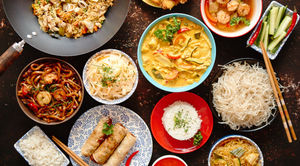 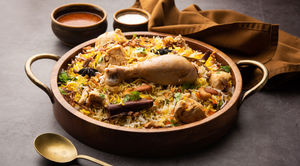 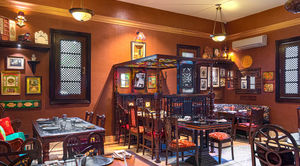