They say it is more than 20,000 years that people have been wrapping food with leaves and using various cooking techniques to make some delicious food. Some submerge it in boiling water, some steam in large earthen ovens, some grill the package on a pan. A chunky piece of Ilish with mustard and mustard oil, wrapped carefully in a banyan leaf and then steamed, is a monsoon dream for almost all Bengalis. It is not only Bhapa Ilish, but banana leaves are also used as a Paturi with several kinds of fish, homemade paneer and even vegetables. For most of the food lovers, it is almost like unwrapping a present using both hands and then to get into the main act of devouring the food.

It is not only the leaf wrapped Bengali dishes which are popular in Kolkata, but a recent trend also shows that many restaurants are serving several popular national and international dishes, which are increasing popularity by the day. 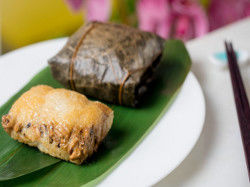 Sticky Rice in Lotus Leaf with Chicken, Prawn and Shitake Mushroom from Yauatcha, Quest Mall, Ballygunge - This dish, which has its origin in Guandong province of South China, has a very interesting history. This dish used to be prepared for the night markets in porcelain bowls and later for convenience, they started making them in lotus leaves. As Chef Kushal Lama explains, this is called Zongzi or Rice dim sum and use of lotus leaves makes this a flavour packed dim sum.

Meen Pollichathu from Monkey Bar, Fort Knox, Camac Street Area - Inspired from the Kerala toddy shops, this Meen Pollichathu is a part of the new menu of The Monkey Bar. It is a Kerala toddy shop style fish preparation paired with Lemon Coriander Kappa. Originally made with Karimeen or Pearl Spotted Fish, the Kolkata adaptation has Bhekti steamed for around 20 minutes.

Potli Biryani by The Coastal Macha, Hindustan Park, Kolkata - One of its kind in Kolkata, this biryani is made in the Kerala style with curry leaves, tomatoes and other spices. It is half-cooked with the meat, then wrapped in a banana leaf parcel for dum. 'Dum' is the typical slow style of cooking and finally, the biryani parcel is grilled on a Tawa to give a final char flavour to the dish. 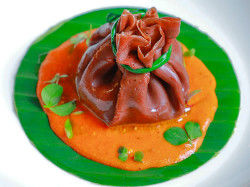 Stuffed Fish Caponata, Millet Ragi Crepes served with Romesco Sauce by JW Kitchen, JW Marriott Kolkata - An inspirational dish from Macher Paturi and others, here Chilean Seabass is used inside the crepe and the banana leaf pouch impart a mild, sweet, earthy flavour and helps to make it juicy and flavourful. 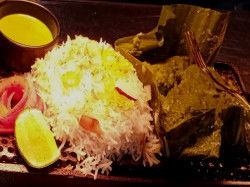 Patrani Machhi from Lord of the Drinks, South City Mall, Prince Anwar Shah Road - Patrani Machhi is the distant cousin of Paturi. Corporate Chef Himmat Rautela explains the process of cooking wrapped in leaves, as it creates an impermeable casing against direct heat, and prevent dirt and fluids to seep in. Additionally, in the process, the leaves pass on their own juices and flavours too. Patrani Machhi, involves a preparation time of 5 - 6 hours of marination of the fish, with various ingredients and then steaming for 8 - 10 minutes.

Hormok and others from Baan Thai, The Oberoi Grand Kolkata - Who can forget Hormok when it comes to the leafy love affair with food. Baan Thai, the Thai speciality restaurant has been serving, Hormok for some time now and it comes in three varieties - Rice and Mushroom, Rice and Edamame and also Chicken. Kai Har Bai Toey is a personal favourite and can be safely called chicken tied up in love knots of Pandan leaves. The succulent pieces of marinated chicken are wrapped in Pandan leaves in a particular way, steamed and then fried is a delight.

Fish in Banana leaf from Ammini, Hazra, Kolkata - A very popular dish with its patrons, this is prepared with plenty of grated coconut and Kerala spices with Red Chilli Paste. This dish tastes best when paired with soft and white Appams.

Popular Locations for Restaurants in Kolkata See All

Top Restaurants in Kolkata See All