Explore a different side of Mumbai city Kala Ghoda is a beautiful neighbourhood in South Mumbai with enough history, culture and art to last a lifetime. Named after a statue built by the Jewish businessman David Sassoon, the statue is of Prince Edward on a black horse, which, sadly, is no longer displayed there. Interestingly, the main area was earlier an army regiment where the rampart used to be. The main road is still called Rampart Row.

It is home to the Jehangir Art Gallery (which used to be home to the iconic Samovar cafe, the amazing David Sassoon Library, the only cast-iron building in the city that was once the famous Watson’s hotel, the stunning blue Knesset Eliyahoo Jewish Synagogue, and even the Prince of Wales Museum. Thanks to the annual Kala Ghoda art festival in the area – which is spearheaded by the Kala Ghoda Association – over the years, this area has slowly morphed into what is considered to be a very trendy neighbourhood in the city.

Apart from the culture and history, the area is also home to some old culinary legends. When you think of the best seafood restaurant in the city, most people will guide you to the little lanes of Kala Ghoda and take you to Trishna for their delectable butter garlic crabs.

If it is hearty North Indian fare, then a quick walk down from Trishna to the superbly popular Khyber for their rich tikkas, kababs and curries. If it is a quick unlimited taste of Gujarat, Maharashtra and Rajasthan you prefer, then hop across from Khyber and feast at Chetana, an institution with regional food and especially thalis.

In line with Chetana was the infamous Joss, and it is in the neighbourhood of Kala Ghoda that restaurateur Farrokh Khambatta made the city fall in love with his khow suey and Asian delights. Today, Joss has moved and the global chain of Italian goodness Serafina has come in its place. Right above them, there is a thumping pub named The Irish House with its incredible bar snacks and plenty of alcohol that seem to entice a crowd almost every night.

Apart from restaurants, there are a few cafés and coffee houses that have blossomed, which have helped morph this artsy district into a budding culinary one. The game changer was the tiny but trendy Kala Ghoda Café with its salads and breakfast items. A few doors down is The Pantry, which is possibly one of the prettiest cafés in the city, let alone the area. They also have the most delightful desserts and make for a great coffee pit stop.

If those were not enough, Paratha Mantra, with its menu of innovative and tasty parathas, opened up next to Delhi’s favourite Asian eatery Mamagoto. Before we knew it, there was almost every cuisine in the area.

The latest entry has been Sancha, the tea house, which is opposite the most decadent patisserie in the city – La Folie Patisserie. The desserts and pastries at La Folie are nothing less than a work of art and often seem far too pretty to eat.

It would seem the small but beautiful Kala Ghoda area has come a long way from being a rampart. If you do not frequent the area often, make it a point to come by, take a stroll and pop into any one of these eateries. You will find a different side to the city – one you might not have even been aware of. 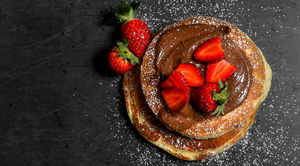 5 Best Pancakes to try on Shrove Tuesday in Mumbai 5 Must Try New Menus in Mumbai Top 10 Cocktails you must try in Mumbai this Festive Season