13 Places in Pune for the Tipsiest Sangrias 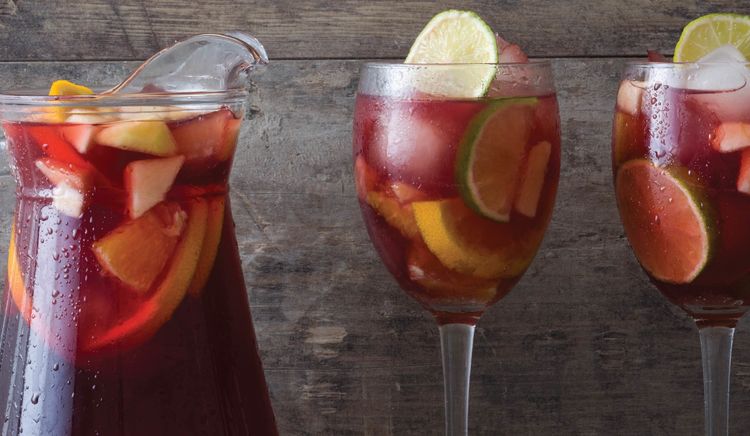 Any veteran bruncher worth his or her salt knows the value of a tall goblet of cool sangria, bathed in the warm afternoon sun, full of crunchy and melting bits of fruit, and stealthily potent in a way that belies its blushing winsomeness. This Spanish/Portuguese drink started with fruity infusions in red wine (the word sangria means bleeding in its language of origin, probably denoting its rich scarlet hue), evolving over time into some truly delicious versions involving white and rosé wines, too – not to mention a mind-boggling array of other flavours imbued into pitchers (and pitchers) of this summer cocktail.

Malaka Spice, for example, does four whole different versions of the sangria, of which two remain my absolute favourite fixes for the heat. The chilled red wine sangria here consists of a ruby Cabernet Shiraz, in which half a red chilli is muddled for a stunning undertone of spice, along with sweet pomegranate seeds and a splash of cranberry juice for some added flush, lime juice and triple sec; the white wine sangria truly captures summer in a flute, redolent with the flavours of mint leaves, soaked cucumber chunks, lime juice and demerara sugar in a crisp Sauvignon Blanc.

Similarly, Terttulia is super popular for its special house sangria – rather a perfect foil to its breezily Mediterranean confines – but the melon sangria here is what really goes that delectable extra mile, as a cocktail of white wine, mint, peach, apple juice and fresh, distinctively fragrant musk melon. 11 East Street Café swirls up an imaginative version of a blanca, bringing in the flavours of refreshing litchi, sweet bananas and apples soaked in white wine, all served super chilled to the willing gourmand.

Dezio pulls off a similar fruity experiment, dosing their summer sangria with the heady combination of sweet passion fruit and lemon, not to mention a version (in both red and white) with smoked cinnamon sticks, imparting simple but deep flavours and fragrance such as nothing else. April Rain, on the other hand, serves its white wine watermelon sangria with a dash of cognac and some slivers of blood orange and apple for some extra sweet-sourness.

But what is the fun in modern sangrias if not the inclusion of varied other spirits to complement the elegant libation? At Margarita Deck, for instance, the Mexican sangria is crafted in your choice of red or white wine and fresh fruit, but also combined with a generous hit of tequila, in an ode to the theme of the restaurant. Similarly, the Greek specialty restaurant Euriska includes a giant splash of metaxa or brandywine in its solstice sangria, mixed and chilled with a Chenin Blanc, cointreau, honey-water, apples and cucumbers.

And, the microbrewery Flambos Brewpub pulls off a coup of its own, serving a unique version of the sangria full of the hearty flavours of beer – yup, that is right, there is no wine in this one, just an incredibly tasty, house-brewed Hefeweizen (wheat beer), the light flavours of which are superbly complemented by chunks of versatile fruit such as apples, oranges and watermelon.

Surprisingly, a beer-sangria combination is also found at The Urban Foundry, but in a one-of-its-kind form – here, the guntur chilli michelada is a combination of bubbly beer, white wine and tons of tiny sliced and alcohol-infused apples, swirled with a masaledaar guntur pepper paste dollop and served with a lip-smacking salt-chilli rim. Their slightly more traditional red wine #Sangh-ria is also interesting with triple sec, orange, lime, ginger ale and the unusual addition of some fresh strawberries.

Meanwhile, Frozen Monkey pulls off one of the more elusive rosé variants in its shy monkey sangria, with a cold pink wine bolstered by the addition of triple sec, cranberry juice and tons of sweet-tart apple slivers. Similarly, The Little Door has a signature Blushy Pink sangria, composed of rosé, triple sec, fragrant peach schnapps, a bunch of exotic Mediterranean mandarins, some glittering gem-like pomegranate seeds and sweet lemonade. The fun watering hole also has a beautiful blanca with white wine, melon and the slightly pungent infusion of ginger ale.

Of all interesting versions of the liquid joy that is sangria, High Spirits puts a rather solid twist to it – the heady beverage is served here in the form of ice lollies, made and served sporadically by the hip establishment in its unofficial summer menu. For these, a base of white wine gets tiny bits of orange, pineapple, peach (or muskmelon) and grape infused into it, and is subsequently frozen for hours on sticks to form the popsicles/ice golas. Since you have to slurp it up before it melts, this version of the sangria undoubtedly provides one of the best kicks around.

P.S: Teetotalers may note that Tales & Spirits does one of the very rare non-alcoholic versions of this beautiful drink in town, worth a mention mainly because of the creativity that is gone into it. The ‘virgin’ concoction here is a mouthwatering mix of chilled black tea, pomegranate juice, OJ, a hit of lime for extra vitamin C, sugar, and chunks of fresh fruits such as apples and oranges.