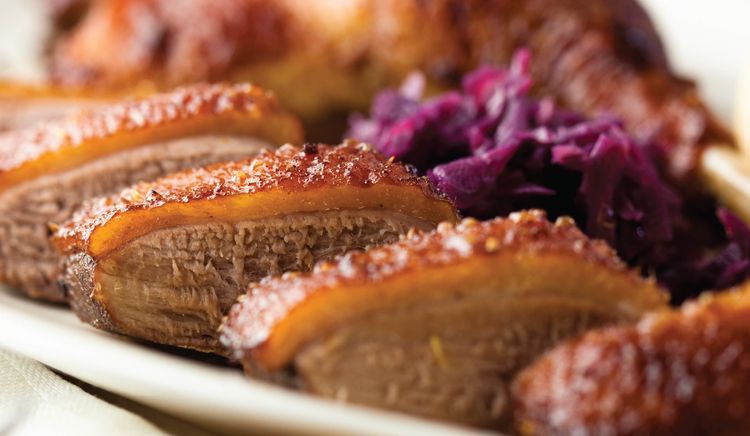 If you are in a love-hate relationship with chicken – love because who does not like chicken? and hate because, well, there is so much of it all around! – A close alternative is a thing of substantial beauty. And that is where good duck meat probably comes into the picture – although the aficionados of this poultry will be quick to assert that it's mildly stronger, slightly gamier flavour stands proud alone, sans any such comparisons.

Pune, in fact, seems to have several eateries that celebrate duck in myriad forms. Some even go so far as to be eponymously branded – such as The Ugly Duckling, where this bird is served smoked and in a wonderfully familiar soy-honey sauce, alongside a soft potato mash and some nutritious stir-fried broccoli. The tale is similar at The Flying Duck, which further expands on this particular meat with a sumptuous and unique duck soup, as well as its signature duck (so well cooked that it is positively fatty and melting) served with herbed rice and a rich legume sauce with hints of peanut swirled through. Moreover, there is also a ‘weekend special’ glazed duck roast, which could inspire you to stand in line for quite a while outside this diminutive restaurant.

Similarly, when it comes to the sheer variety of duck offerings, Mainland China must be mentioned. Here, one could indulge in a finger-licking-good appetiser of roast duck tossed in a sweetish plum and red chilli sauce, or a duck-meat and cabbage soup that will warm your heart right up. Mains especially have a whole lot of options, with duck in sauces such as schezwan chilli, Hunan, black pepper, and greens-and-garlic. Actually, it does appear that Pan Asian cuisine restaurants lead the pack when it comes to duck. Trikaya, for instance, does both an aromatic Balinese duck curry to have with a mound of hot fried rice and a wonderful roast Hong Kong duck marinated with super-fragrant spices. Exotic is the name of the game over at Malaka Spice as well, where the grilled Mandarin duck is cooked with sliced chillies, lychee and pineapple, then doused in an exotic honey-orange sauce. Their kumara duck is similarly grilled, but with burnt whole garlic, chillies and an exotic teriyaki sauce. If you are here just for the lovely cocktails, do also order a round of duck momos, in all of their intricate and delicate glory, too. Whispering Bamboo at Vivanta by Taj does a double-cooked sliced duck in black pepper sauce, and also serves a traditional roasted Peking duck, accompanied by pancakes, scallions, tender cucumber and a hoisin sweet bean sauce. Not far behind, is the classy Royal China which also serves a similar crispy aromatic duck or Peking duck with the usual accompaniments, such as pancakes, spring onions and cucumber, but for lovers of all things crunchy, it also offers crispy duck spring rolls that go perfectly with a round of premium tipple.

Speaking of crunch, at Farzi Café, the chilli duck samosas in hoisin sauce is another dish that will leave you reaching for more, balancing textures such as crunchy and sticky, and flavours such as umami, sweet and fiery.

Restaurants serving Western-style cuisine have not quite ‘ducked’ the trend either. At The Flour Works, expect your roast duck in simple, pristine glory, soaked in its own tasty juices and served with a rich potato and vegetable hash on the side. Euriska does a duck confiture by employing a sophisticated cooking technique to achieve a dish that balances sweet and tartness with the bird’s gamey flavour; it is served with an innovative Cointreau-infused veg ragout and a citrus relish for a more sourer twang. Arthur’s Theme, on the other hand, has three options for gourmands – a ‘Saxon’ of half a roasted duck in a herby orange sauce with French fries, a ‘Gwen’ of duck roast fried in breadcrumbs with a cheese sauce and potato croquettes, or an ‘Ester’ of grilled duck in a rich plum sauce, with home-made roast potatoes. Keeping it eclectic, Stone Water Grill not only serves a chilli smoked duck breast with hoisin bok choi and a delish ginger-kokum jus, but also pulls off a duck salad, with soy roast duck, water chestnuts, medicinal herbs and a scattering of sweet pomegranate pearls.

Hold on though – if your heart only beats for good old desi khana amid all these fancy flavours, here is a piece of good news: Punjab Grill serves an extraordinary tandoori barbary duck, soaked in that famous orange marinade and enhanced with a hint of golden saffron.

Discover the Top Restaurants in Pune with EazyDiner

Beers with a Twist at Effingut Brewerkz in Pune Idli-ng Away your Time?